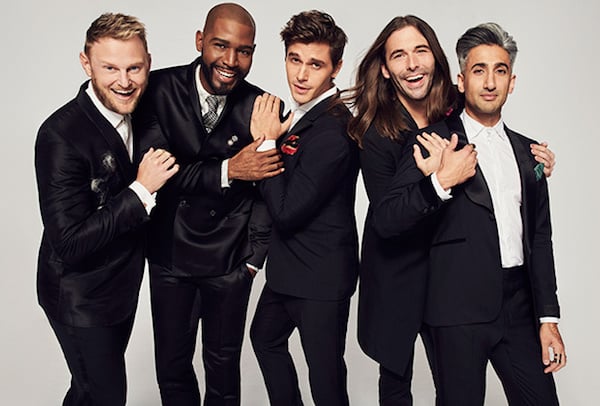 It’s been more than a decade since the original Fab Five of TV first attempted to spread their gay magic to the straight masses. Now, a new gaggle of gifted gays are ready to lend their queer eyes to today’s straight guys. The Netflix reboot of Queer Eye for the Straight Guy hits the streaming service Wednesday.

What do Ross Mathews, Sugar Ray’s Mark McGrath and Real Housewives of Beverly Hills alum Brandi Glanville have in common? They’re all moving in with Omarosa. Catch the motley crew on the first stateside season of Celebrity Big Brother Wednesday at 8 p.m. Eastern on CBS.

In last week’s episode of The Assassination of Gianni Versace: American Crime Story, killer Andrew Cunanan (Darren Criss) tells a victim that he’s already murdered two people before killing him. Tune in Wednesday at 10 p.m. Eastern on FX to see their stories.

Drag may not be a contact sport, that don’t mean there won’t be bad blood. The queens are still smarting following last week’s elimination on RuPaul’s Drag Race All Stars, Thursday at 8 p.m. Eastern on VH1. Check out the first few minutes of this week’s episode above.

Just because the summer games show a little more skin doesn’t mean there aren’t plenty of reasons to tune in to the Winter Olympics. Take in all the pomp and pageantry Friday at 8 p.m. Eastern on NBC with the 2018 Winter Olympics opening ceremonies (and bring on the beefy bobsledders).