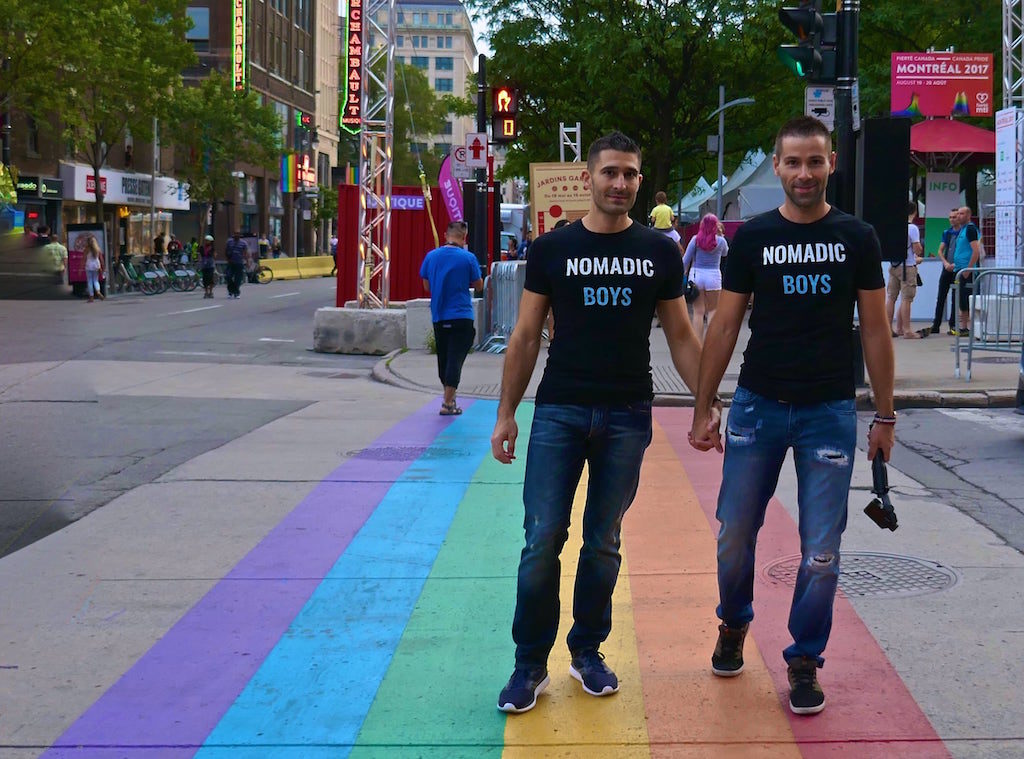 We completely fell in love with Montreal in Quebec, Canada. We came here in the summer to celebrate the first Fierte Canada Pride, which was being hosted by Montreal. It was a blast – one of the best pride events we’ve been to, and in a very welcoming gay friendly city.

These are our 5 highlights of Montreal, which gay travelers here will not want to miss out on.

#1 Party at the Montreal Gay Pride in August

If you’re coming to Montreal in August, it’s not only perfect weather, but this is when the week long gay pride festival takes over the entire city. It’s a week-long festival with awesome outdoor parties, events and a huge parade on the final day.

The heart of the Montreal gay pride is in the gay village, which becomes a huge party every day. The atmosphere is a lot of fun and everyone in the entire city joins in. What touched us the most was seeing Canada’s (very handsome) leader, Justin Trudeau leading the entire parade. Can you even imagine Trump or Teresa May leading a gay pride parade in the US/UK?

Check out our vlog about the Montreal gay pride and the gay scene in our vlog:

The Gay Village of Montreal is an official district of the city and is recognized on official maps and in social media location tags. It’s the largest gay village in North America and is the focal point of the gay scene of Montreal.

There are so many different bars, clubs and other gay hangouts here to suit everyone. For us, we enjoyed hanging out on the Sky Bar’s rooftop bar and loved the friendly atmosphere in Le Stud bear club. Bars and clubs in Montreal’s gay village come and go all the time, but Le Stud and Sky Bar are like fixed additions to the gay scene of Montreal and definitely a good place to start your night.

To find out more check out our article about the gay scene of Montreal and also read about more gay events in Montreal you shouldn’t miss.

#3 Admire the art at the Musée des Beaux-Arts

The Musée des Beaux-Arts (Fine Arts Museum) is the most prestigious of Montreal and the most visited in Canada. It’s huge, spread across 3 different buildings and features Canadian artists and contemporary art. It also has unique and impressive exhibitions by Jean Paul Gaultier.

Montreal is a city of art. There’s always many outdoor art displays featured across the city, usually outside of the Fine Arts Museum (Musée des Beaux-Arts). This museum is also one of the most prestigious of the city and the most visited in Canada.

We definitely recommend devoting half a day to exploring this museum – it’s huge, spanning several buildings and crosses the street as well. It features both Canadian artists and contemporary art, with some pretty impressive exhibitions, the most popular of which include Picasso’s “Meeting in Montreal” and Leonardo da Vinci’s “Engineer and Architect”.

The museum also has loads of free outdoor art on display, which you could easily spend a good chunk of the day exploring.

The best hangover comfort food ever! After partying all night in the Gay Village, a Sunday lunch of poutine is the gooooood!

Warning – it’s not light though…Poutine is chips with gravy and cheese curds. You can either eat it by itself or as an accompaniment to a burger or other main. We put away several poutines during our trip here.

Read more in our 5 best foods in Montreal you need to try.

#5 Climb Mont-Royal for the best views

Montreal is named after the 233m (765 ft) high hill on which it is built called Mont-Royal. In French, the city’s name translates to Royal Mount.

Mont Royal is the most iconic symbol of the city, and the point from which locals get their bearings. Interestingly, Montreal has a law which requires that buildings in the city are not higher than the peak of Mont-Royal. Therefore, this is the ideal place to come for some of the best views across the city.

Mont-Royal is very easy to reach from downtown – you can either walk or drive up.