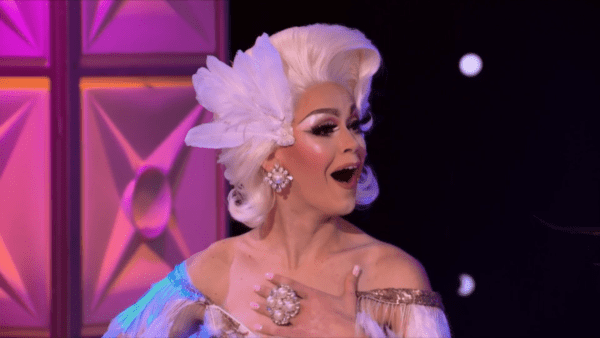 Another week, another hokey acting challenge on RuPaul’s Drag Race. It’s easy to forget how many of these early-season episodes are devoted to large, group acting challenges that don’t do most these girls any favors. Wake me up when it’s time for Snatch Game, I guess.

Unlike last week’s silly lip-sync, this time the comedy is coming from the queens themselves. They need to write and star in commercials for new dating app, and the results are, well, mixed at best.

However, there were a few knockout runway lewks and some delicious drama off-stage to buoy an otherwise lackluster week of competition.

Whether you’re a dom top seeking friends with benefits or a piggy pup with a heart of gold, let’s all swipe right and flock to our recap, below. 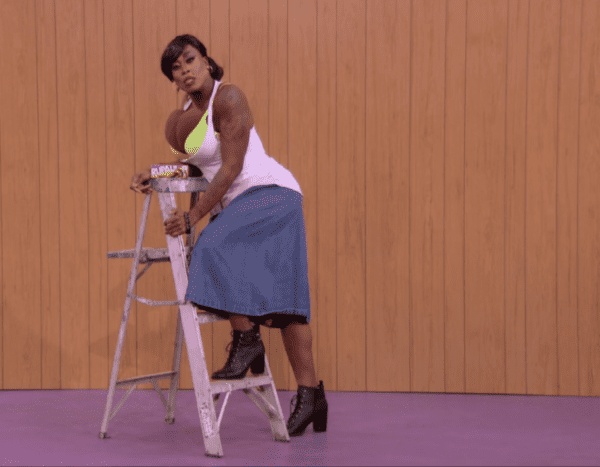 This week’s mini-challenge tasks the girls with doing some “fresh-off-the bus” quick drag and then shilling Ru’s chocolate bar with increasingly degrading auditions. This feels like a perfect set-up for Blair St. Clair (whom I compared to a literal fresh-off-the-bus character back in my episode one recap). The casting couch concept did initially make me a little nervous considering our post-Weinstein, #MeToo world (the backdrop was also an homage to Calvin Klein’s banned 1990s ad), but they kept it light and mostly ridiculous.

Blair shines with a tap routine performed with increasing desperation, while Monet and Monique fail hilariously to deliver an Irish accent. They’re all rewarded with captain status to choose their teams. 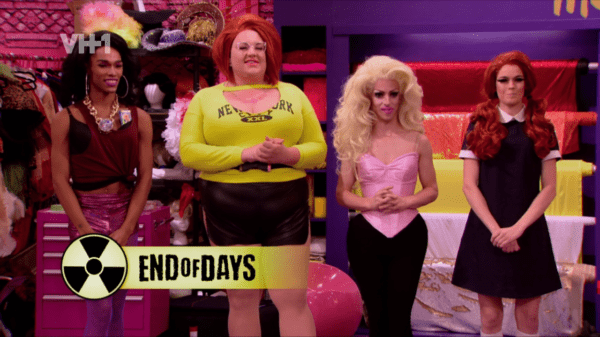 Blair works alongside Eureka, Cracker and the Vixen to advertise EndofDays, an app for doomsday preppers. Blair, Eureka and Cracker fully grasp the camp sensibility necessary to shine in this kind of thing, with Eureka in particular knowing how to use slapstick, low-brow humor to her advantage. She manages to bring her entire big, bold personality to the challenge, while the Vixen merely stands around, coasting on the strength of her teammates. They easily turn in the strongest finished product. 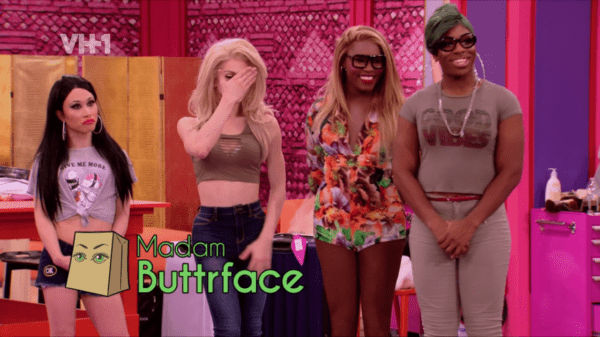 Team Monet (including Asia, Yuhua and Aquaria) come in a distant second. Their app, MadamButtrFace, is designed to attract a gurl with banging bod and busted mug. Aquaria and Asia construct hilariously disfigured visages that play real well on camera, especially Asia, whose freeze-frame face has all the judges in stitches. Michelle compares her to the Missing Link, and she’s not far off. It’s great.

Yuhua really struggles. Her make-up — a strange collection of dots with long hairs coming out — reads, as Michelle describes, “hairy dalmation with HPV.” (To be fair, that is my Grindr tribe.) Worse yet, her dialogue barely makes sense and doesn’t seem to contain a single joke. I guess there’s a reason she was chosen last. 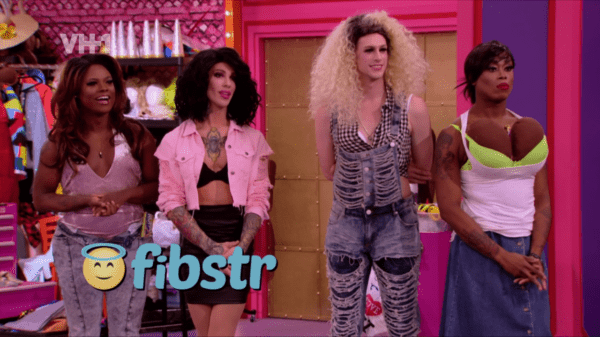 The worst of the bunch is Monqiue’s team. They’re pushing a product called Fibster, designed to find love for pathological liars. Ooh, gurl, it is a MESS. Monique inexplicably attempts to direct herself, shouting her own “action” and “cut” as she films. Dusty’s theatrical passion comes through, and she is able to wade through indecipherable intents and failed jokes relatively unscathed.

Kameron and Mayhem are less lucky. Initially, Mayhem was slated to take the role of narrator, but Kameron requests a last minute switch since she wrote the lines. It’s obvious Mayhem isn’t happy about this change-up, but she’s trying t be a team player. We all know, though, that this is not RuPaul’s Best Team Player Race, and, as Monique says, “Closed mouths don’t get fed.”

Although few queens showcased dramatic skills while filming their commercials, there was a lot of drama in the workroom.

Most notably, Aquaria couldn’t help but make snide comments about the Vixen using Monique’s wig last week for the “Best Drag” runway. Vixen is not one to let things go, so she claps all the way back at Aquaria, not just shutting her down, but nearly running her out of the state. Vixen warns her about poking the bear (“Poking the Bear” is another great dating app, honestly), but it doesn’t seem like Aquaria gets the message. 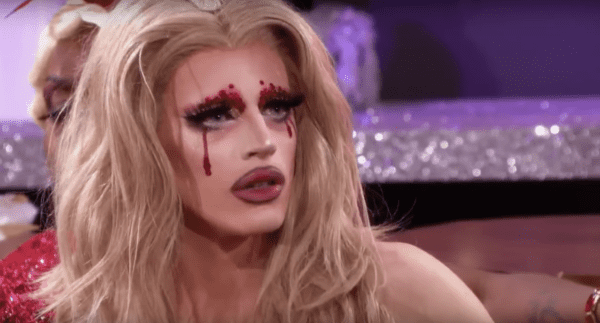 I don’t usually delve into Untucked in these recaps, but this conflict really expanded in last night’s episode. The Vixen took this confrontation and used it to illustrate the persistent “angry black woman” trope and how Aquaria’s actions (provoking Vixen, then crying about it like she’s the victim) are perpetuating that. On Drag Race, Vixen’s unwillingness to take the high road might have seemed petty, but with this additional context it’s clear that she’s putting a very purposeful stake in the ground. I’m here for it.

We also learn in the workroom about Blair’s conservative, but supportive mother and Dusty’s traumatic coming out experience. Dusty was raised in a religious household and asked God for a change before coming out. The next day, Dusty’s dad found some things on the computer, forcing Dusty out of the closet. Dusty’s parents then got Dusty exorcised (yes, literally exorcised), and now they no longer really talk. It’s a harrowing, heartbreaking story, but, sadly, one that’s still all too familiar, even today. The fact this show can blend moments like this with Miss Vanjie and “Swallowease” is part of what makes it so brilliant.

Guest judges this week are Younger (t)hottie Nico Tortorello and, looking the best she has in 20 years, Courtney Love.

The runway theme is simply “feathers,” which enables all the queens to interpret and go all out. We’ll discuss more of the looks in the rankings below, but the best and worst also fell in the top/bottom three this week.

As far as winners go, Eureka stunned with a black feather, raven fantasy. Judges loved the way she brought it this week both in the commercial and the runway. Blair also received high marks, though, again I’m still just not getting it. Our overall winner, Asia, slays both the challenge and the runway. Her mugging gets the biggest laughs, and her Tweety-inspired runway look is creative, cool and still so beautiful. It’s an instant classic.

Our feather-dusty bottoms include Mayhem (whose lackluster performance and so-so magenta feather gown with plunging neckline failed to wow) and, unsurprisingly, Yuhua. (Also unsurprisingly, Yuhua is full of excuses for her performance and runway look.) Kameron also lands in the bottom for her flat narrator, but her runway look is not just the best of the night, but one of Drag Race’s all-time best. It’s ornate and gorgeous and looks utterly incredible on her body.

It’s Yuhua and Mayhem down to lip sync to the Hole classic “Celebrity Skin.” Yuhua tries to channel the rock ’n’ roll energy into some air guitar, but it looks more like she’s aggressively playing a violin pizzicato. She also hits a poorly-timed jump split that lands with a thud. Mayhem, meanwhile, sells the intensity, ripping feathers out of our her gown and tossing them around the stage.

She lives to drag another day, while Yuhua is sent packing.

Where does that leave all our girls? This season’s strong batch of competitors is neck-and-neck, making this more difficult than previous seasons. Check out our rankings below, and leave yours in the comments!

1. Although she wasn’t the star of the day, Miz Cracker still had a solid performance and runway. Despite comparisons to Aquaria, I think they have very unique points of view. There’s a classic glamour to everything Cracker does that feels like a signature. She made the most of the material in the commercial, and I’m excited to see her every time she’s on screen.

2. I am still not feeling Aquaria’s attitude, but she can certainly turn a look. She’s not afraid to look foolish (as she did in the MadamButtrFace commercial), but really she wowed me with her bloody dove runway couture. I’m not sure Aquaria is the sharpest queen when it comes to comedy, but she is certainly the most creative and exciting presence on the runway.

3. Eureka is back, baby. More than ever before, we have a bigger girl that’s a serious contender for the crown. Everything about her feels amped up. Sure, she’s a little extra, but this is a drag queen competition, and that’s not a bad thing.

4. I am officially team Asia. My bias against pageant girls notwithstanding, Asia showed some real innovation this week with the Tweety lewk. I did not see that coming! On the other hand, yes, she was the star of her commercial, but … I also kind of think she lucked into it, Alyssa Edwards-style. For now, she’s got my attention.

5. Dusty was the victim of a bad team this week. Her performance was solid, but I wasn’t blown away by the feathery ensemble. It just didn’t seem to fit quite right. In a season where we’re supposed to see 10s across the board, I feel like Dusty is giving us solid 7.5s.

6. This is the best the Vixen has looked so far. Not only was the peacock gown gorgeous, but the way the tail draped to the side actually made it so much more exciting than if it trailed directly behind her. Vixen was stiff in the mini and maxi challenges, which makes me worry that she has a hard time being as silly as this show demands.

7. I’m waiting for Monet to have a moment, but it just hasn’t happened yet. I’m loving the sponge gag (very “Purse First”), but beyond that, I’m not thrilled. Also, I feel like there’s something about the way Monet creates a body silhouette that just feels off.

8. Are we not talking about Monique’s use of chest pads this episode? I sort of got it for the quick drag, but why did she wear them in the commercial? It was very distracting. Her runway look reminded me of RuPaul’s season five goddess promo pic, but not quite as chic. If she keeps getting frustrated by her lack of success, she’s going to have a breakdown, mark my words.

9. That lip sync went a long way to redeem Mayhem’s otherwise abysmal showing this week. There’s a star quality to her that can’t be denied, and I hope, like Eureka, she bounces back from this.

10. I know, I know, dropping Blair down here says more about me than Blair, but, you guys, I just don’t get the appeal. She was best as the nervous queen in the mini-challenge audition, but that’s the energy I get from her whenever she’s on screen. It just feels like she needs more experience/practice/confidence. She just seems like she’s not quite ready yet.

11. I’ve been high on Kameron the last few episodes, but she took a nosedive this week. I assume her outstanding runway presentation saved her from the bottom two, but Kameron’s personality feels a little too flat. Maybe Kameron’s days aren’t as numbered as some other girls, but I would be surprised to see her last beyond the half-way point.

12. Sending Yuhua home was the right choice. It’s not that she doesn’t have the goods, but I just don’t think reality competition is the best place for her to showcase what she does. There is so much to juggle in terms of doing your best drag, satisfying challenges AND putting your personality forward that just seems to be beyond Yuhua right now. She seems incredibly fun and likable, but boy did she show the wrong face to the judges each week.