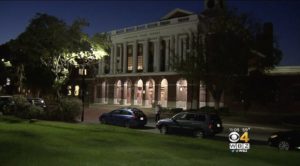 Fourteen students at Arlington High School outside of Boston are facing disciplinary action after they vandalized the school, breaking glass and spray-painting swastikas and anti-gay slurs on the building.

NBC10 Boston reports: “Officers responded to Arlington High School on Massachusetts Avenue last Wednesday, police and the town’s superintendent announced Tuesday. Responders found damaged property inside the building, as well as a swastika and anti-gay slurs outside. It appeared a group of people had entered the building, using and damaging several fire extinguishers, while damaging vending machines, display cases and an emergency defibrillator inside the facility. The suspects, later identified as all male students, also used spray paint inside and outside of the school, police said.”

All the students accused are male teens. Additional vandalism included feces spread on walls, according to one student.

WBZ4 Boston adds that the community’s newly formed Rainbow Commission has gotten involved, and students were invited to graffiti the building with messages of love and solidarity in the wake of the incident.

Previous Post: « Man Completely Loses It When Ireland’s Gay Eurovision Entry Makes It to the Finals: WATCH
Next Post: Cynthia Nixon Resurrects 1977 Ed Koch Smear, Flips It: ‘Vote for the Homo, Not for the Cuomo’ »