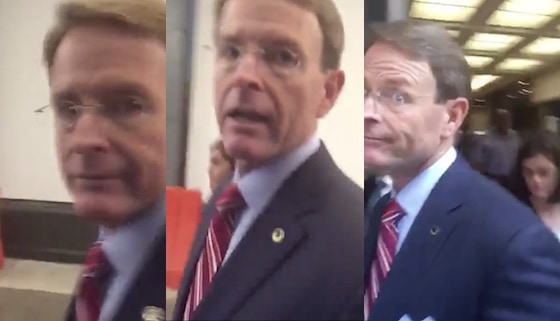 Family Research Council President Tony Perkins, who for decades has led the charge to remove rights from LGBTQ people across the U.S., has been appointed to the U.S. Commission on International Religious Freedom by Senate Majority Leader Mitch McConnell.

Perkins’ appointment was announced in the Congressional Record.

Perkins’ group, the FRC, has been designated a hate group by the Southern Poverty Law Center, which writes: ‘The FRC often makes false claims about the LGBT community based on discredited research and junk science. The intention is to denigrate LGBT people as the organization battles against same-sex marriage, hate crime laws, anti-bullying programs and the repeal of the military’s “Don’t Ask, Don’t Tell” policy. To make the case that the LGBT community is a threat to American society, the FRC employs a number of “policy experts” whose “research” has allowed the FRC to be extremely active politically in shaping public debate. Its research fellows and leaders often testify before Congress and appear in the mainstream media. It also works at the grassroots level, conducting outreach to pastors in an effort to “transform the culture.”’

Said President Sarah Kate Ellis: “Tony Perkins is the most recognizable anti-LGBTQ activist in America. He has espoused the most extreme views of LGBTQ people and other vulnerable communities including vocally supporting foreign laws that punish LGBTQ identity with death. The idea that Perkins would be making policy recommendations to an administration that is already anti-LGBTQ is dangerous and puts LGBTQ people directly in harm’s way.”

Right Wing Watch adds: ‘FRC and its Religious Right allies warmly embrace the world’s most religiously repressive regimes while they work together to oppose international recognition for the rights of LGBTQ people and to enshrine “traditional” views of gender, marriage and family. In 2016, FRC’s Peter Sprigg was among the U.S. Religious Right figures who participated in an event at the United Nations celebrating the “Group of Friends of the Family,” which includes a lot of overlap with countries identified by USCIRF as the worst in the world for religious freedom. Among the countries singled out for “pro-family” praise at the event were Sudan, which the USCIRF said “represses and marginalizes its minority Christian community” and Saudi Arabia, which USCIRF calls “uniquely repressive” when it comes to religious freedom.’

According to a press release from FRC, the commission which Perkins was appointed to is tasked with reviewing “the facts and circumstances of religious freedom violations and makes policy recommendations to the president, the secretary of state, and Congress.”

AKA working to pass legislation that gives a license to discriminate against LGBTQ people based on religious beliefs.

Crowed Perkins in a statement: “I am grateful to Majority Leader McConnell for appointing me to this prestigious position. From my post at USCIRF, I look forward to doing all that I can to ensure that our government is the single biggest defender of religious freedom internationally. One immediate step our government can take in this regard is to make sure that the Frank R. Wolf International Religious Freedom Act is fully and properly implemented. As a commissioner, I also look forward to working with willing partners among those nations on USCIRF’s list of ‘Countries of Particular Concern’ to substantively address religious freedom concerns, including at the grassroots level, and assist them in being removed from the list. It is my hope that through the work of USCIRF, the world will become one step closer to recognizing the vital role religious freedom and the defense of religious minorities play in peace, security and human flourishing.”