Indianapolis CrossFit gym CrossFit Infiltrate closed permanently on Wednesday following backlash over an email sent by one of its employees shutting down an LGBT member’s PRIDE group workout because, he explained, “At the foundational detractor from health, as we believe God sets the parameters for, is pride. We believe that true health forever can only be found within humility, not pride.”

Shortly after the gym decided to shut down, a corporate CrossFit employee, Russell Berger, began tweeting in support of  the gym’s homophobic views.

Tweeted Russell Berger: “As someone who personally believes celebrating “pride” is a sin, I’d like to personally encourage #CroossFirInfiltrate for standing by their convictions and refusing to host an @indypride workout….Thank you #CrossFitInfiltrate for standing by your convictions and refusing to celebrate sin by hosting an @indypride workout. The intolerance of the LBGTQ ideology toward any alternative views is mind-blowing.”

The tweets are screencapped below: 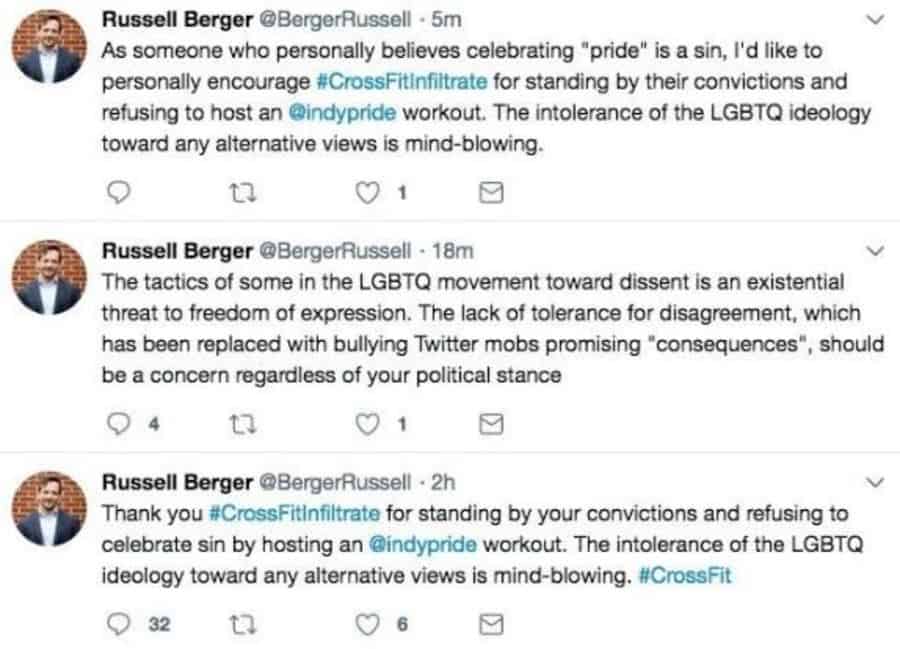 CrossFit tweeted later on Wednesday. That Berger had been placed on leave. It later tweeted that he had been terminated: “The statements made today by Russell Berger do not reflect the views of CrossFit Inc. For this reason, his employment with CrossFit has been terminated.”

Effective immediately, Russell Berger has been placed on unpaid leave while management completes a thorough review.

The statements made today by Russell Berger do not reflect the views of CrossFit Inc. For this reason, his employment with CrossFit has been terminated.

Watch a report from ABC Indianapolis: