POLLS. Trump disapproval at new high: “Disapproval of Donald Trump is at a new high, support for the Mueller investigation is broad and half of Americans in a new ABC News/Washington Post poll favor Congress initiating impeachment proceedings against the president. Sixty percent in the national survey disapprove of Trump’s performance in office, numerically the highest of his presidency, albeit by a single point; that includes 53 percent who disapprove strongly, more than half for the first time. Thirty-six percent approve, matching his low.”

BOYCOTT IN-N-OUT? They recently donated to the California Republican Party.

MICHAEL COHEN. Former Trump lawyer sells stake in NYC real estate: “Cohen sold his stakes in 330 East 63rd St. and 133 Ave. D earlier this month, according to documents filed with New York City. The records show a combined sale price of almost $13 million, but that also accounts for Cohen’s share of the debt, a person familiar with the sales said. Cohen cleared about $7 million, according to the person. Cohen purchased his stakes in the properties in 2015.”

COLIN KAEPERNICK. Collusion case against NFL can advance: “Kaepernick, once one of the league’s best quarterbacks, has been out of work since March 2017, when he became a free agent before the San Francisco 49ers could release him. As a parade of lesser quarterbacks, at least statistically, found work, he filed a grievance asserting that the league’s owners had conspired to keep him out because of his protests.” 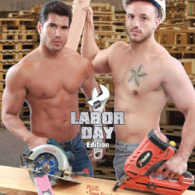 ON THE RAG. This week on the gay magazines…

GLEE GUY. Kevin McHale shows off body transformation: “Simply put, I had become ‘skinny fat.’ I had been working through an intestinal/digestion issue that was eluding diagnosis and that really took a toll on me. I was constantly in pain, I had tried so many different elimination diets – nothing was working. It got to the point where I was already feeling miserable because the intestinal issues and plus the self-added guilt of not getting myself to the gym or eating as healthily as possible, it was a recipe for disaster. I knew enough was enough for a while, but luckily my friend Scott Mills texted me out of the blue about Ultimate Performance coming to LA and I jumped at the chance to work with them.”

HOW IN THE HELL DID THIS LEAK? Like, I'm genuinely shocked. Icons in OS code is one thing (and really dumb), as is early releases of software. But a press photo? How did this happen?! https://t.co/60yeZslZar

ARRIVAL OF THE DAY. Lady Gaga at Venice Film Festival. “When I was first starting out, I was not the most beautiful girl in the room and there were lots of women that were singers but did not write their own music, so many record producers wanted to take my songs and give them to other women to sing. I was holding on to my music with my cold, dead fingers saying, ‘You’re not going to take my songs from me.’ And also, they make suggestions about how you should look… but no matter what they asked me to do, I always had to make sure that it was done my way. I never wanted to be sexy like other women, I never wanted to be like other women. I wanted to be my own artist, and have my own vision.”

Cancel all other Venice entrances, @ladygaga has arrived pic.twitter.com/U9xndZfI7O

TRAILER OF THE DAY. Hugh Jackman in The Front Runner.