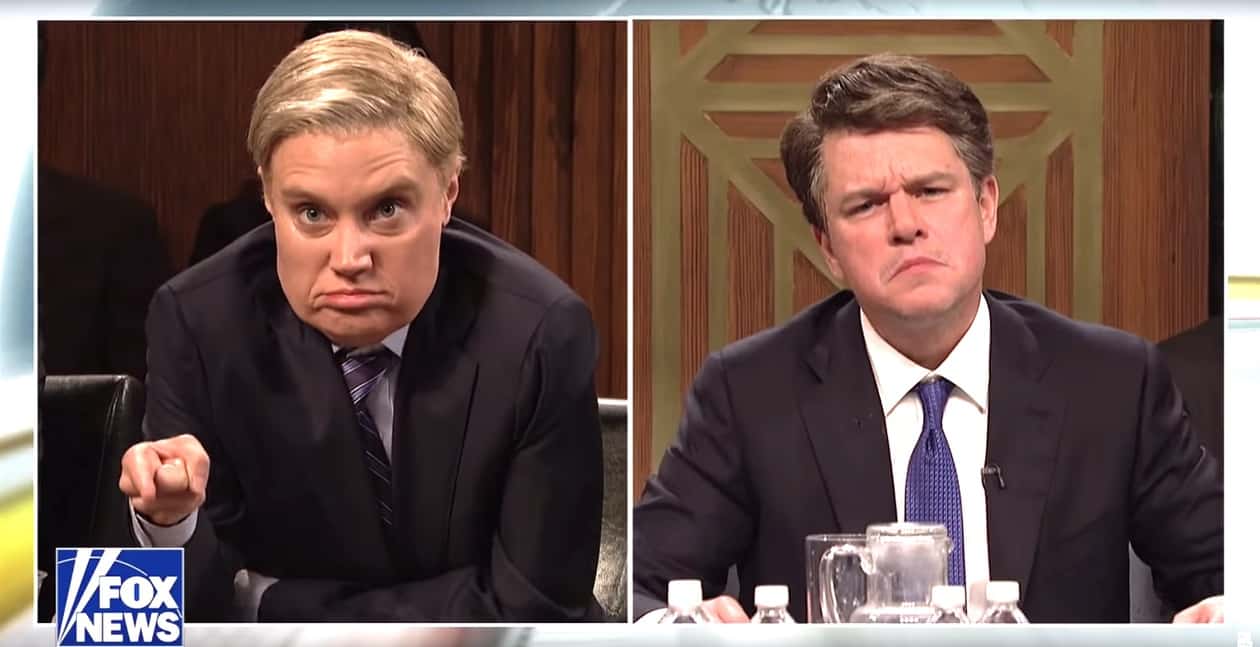 Saturday Night Live returned to take on this week’s historic Senate Judiciary Committee hearings for Brett Kavanaugh with Matt Damon as the judge.

Said Damon’s Kavanaugh upon sitting down in his chair: “Let me tell you this. I’m going to start at an 11. I’m going to take it to about a 15 real quick. First of all I showed this speech to almost no one. Not my family, not my friends. … This is my speech. There are others like it, but this is mine. I wrote it myself last night while screaming into an empty bag of Doritos.”

She went on: “Did you ever drink too many beers?”

Spit Damon’s Kavanaugh: “You mean was I cool? Yeah.”

Some additional key Kavanaugh moments. “I’m a keg-is-half-full kind of guy,” “I don’t know the meaning of the word ‘stop,'” and “To quote my hero, Clint Eastwood’s character in ‘Gran Torino,’ ‘Get the hell off my lawn.’”

Finally, he concluded with a note on his temperament: “I went to Yale. Worked my butt off to get here — I busted my buns, I lifted weights. … Am I angry? You’re damn right. But if you think I’m angry now, just wait until I get on that Supreme Court — because then you’re all going to pay.”

Kate McKinnon took on the man who wants to be Trump’s next attorney general, Senator Lindsey Graham, snapping: “You put this man on the Supreme Court now. No vote, no discussion. You give him a damn robe and you let him do whatever the hell he wants. Because this right now, this is my audition for Mr. Trump’s Cabinet. And also for a regional production of The Crucible.”