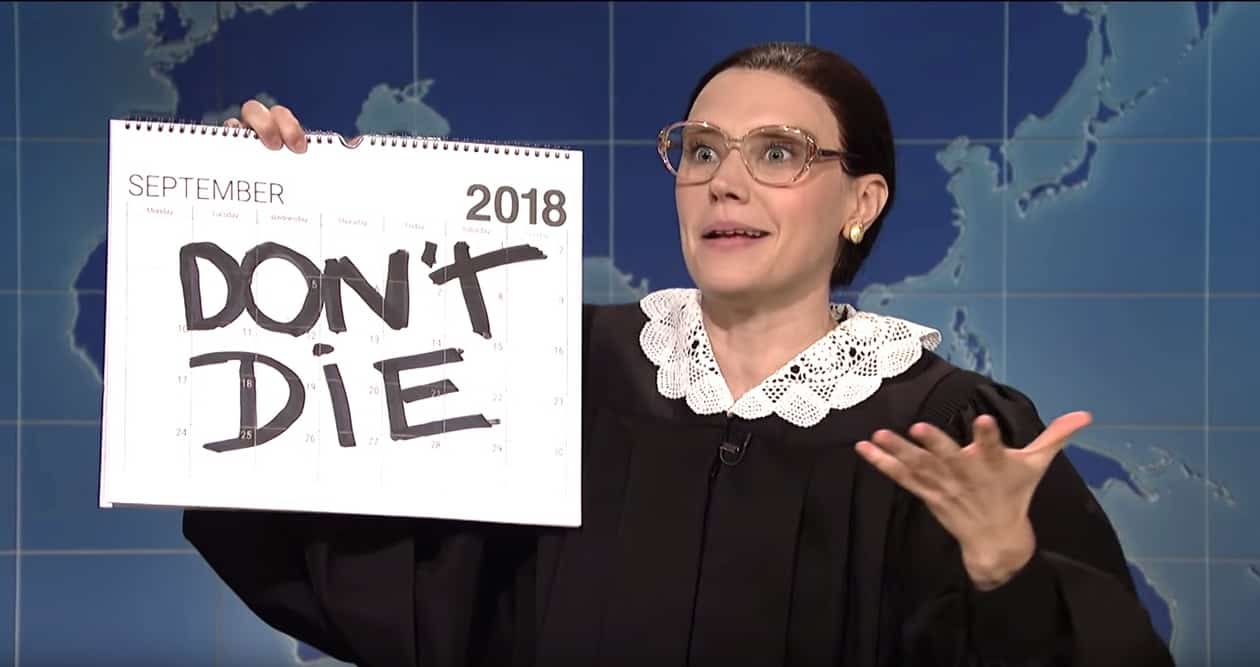 SNL’s Brett Kavanaugh slams continued in the show’s Weekend Update segment, where Colin Jost and Michael Che had some choice words for the judge.

Added Che: “I just want to remind everybody that all this yelling and crying happened at this dude’s job interview. I mean, typically, when you’re asked about a sexual assault and your drinking problem at a job interview, you don’t get the damn job.”

Che also wondered why the GOP doesn’t just withdraw Kavanaugh: “Why does it have to be him? You can’t just pick another dude from your Illuminati lizard meetings? Are Republicans so pro-life that you don’t even have a Plan B for this?”

The Weekend Update hosts were later joined by Kate McKinnon’s Ruth Bader Ginsburg, who commented on the Kavanaugh nomination, who entered singing Rick Astley: “Never gonna give you up, never gonna let you down, never gonna turn around and retire.”

She then launched into a number of “Gins-burns” on various members of the Senate.

“Hey Lindsey! Are you Herbie? Because you look fully loaded. That’s a Gins-burn!”

She also commented on Jeff Flake’s call for an FBI investigation: “Hey Jeff Flake, you can borrow a pair of my panties since you’re so concerned about covering your own ass. That’s a Gins-burn!”

Asked about Kavanaugh’s 1982 calendar, McKinnon’s Ginsburg replied: “You mean the portrait of the judge as a young d-bag? Spellbinding.”

She then furnished a calendar of her own from 1982 that read “Turn 100,” “break glass ceiling,” and “do laps in a bird bath” and one from this year that read “Don’t Die.”

“I’ve been alive for so long, I’m restarting my lifecycle, like a cicada,” she whispered. “I’m going through puberty again. I’ve got all sorts of feelings about Riverdale. That Cole Sprouse, he’s looking like a snack to me.”

Asked what might happen if Kavanaugh were confirmed, McKinnon’s Ginsburg replied, “The guy likes drinking games so much, we got one planned for him. It’s called quarters. It’s where me and Sotomayor put a roll of quarters in a sock and beat the hell out of him.”

Previous Post: « Trump: I’m Not Limiting FBI’s Kavanaugh Investigation, ‘I Want Them to Interview Whoever They Deem Appropriate’
Next Post: Kellyanne Conway: ‘I’m a Victim of Sexual Assault’ — WATCH »