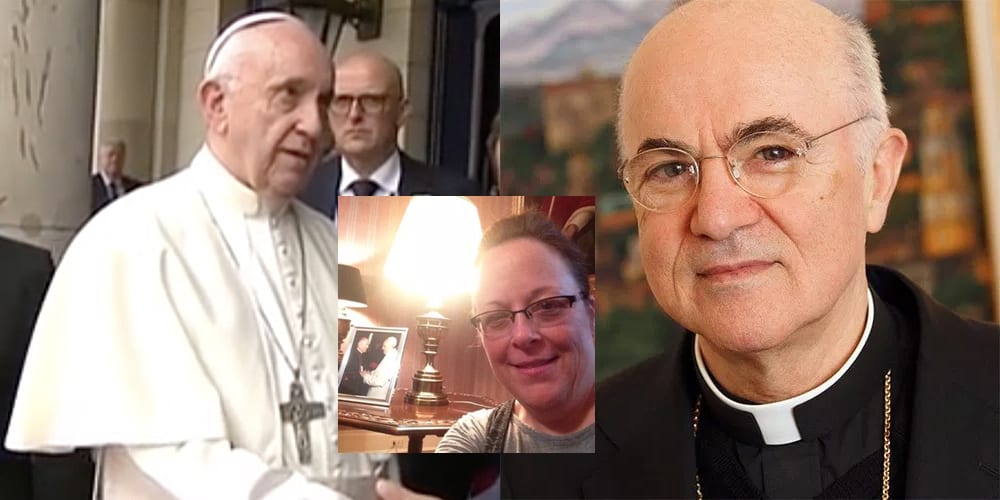 Archbishop Carlo Maria Viganò, who last week (in a months-long collaboration with conservative journalists and media) accused Pope Francis of covering up sexual misconduct by an American cardinal, launched another salvo on Friday. Viganò released a lengthy statement accusing the Pope of lying about the 2015 meeting with Kentucky clerk Kim Davis that made international headlines. Davis became a religious-right poster child after refusing to issue marriage licenses to a gay couple. Viganò set up the Davis meeting.

Viganò, the former Apostolic Nuncio who led the Holy See’s diplomatic mission to the U.S. and was named to his position by Pope Benedict, is a cultural warrior who shows up at anti-abortion rallies as well as NOM’s ‘March for Marriage’ in Washington D.C. His accusations against Pope Francis are the spearhead of an effort by conservatives in the Catholic church to damage the Pope.

The NYT reports: “They believe the pope is abandoning the church’s rules and traditions through his shift away from culture-war issues like abortion in favor of an emphasis on inclusion, including toward gays, whom Archbishop Viganò and his allies blame for pedophilia in the church.”

In his new statement, which was published by the ultra-conservative LifeSite News, Viganò accuses the Pope of lying about the meeting with Davis.

This is a summary of the events.

As mentioned at the beginning, on August 28, 2018, the New York Times reported an interview with Juan Carlos Cruz, in which Cruz reported that during his meeting with the Pope, in April 2018, the Pope told him about the Davis case. According to Cruz, the Pope said: “I did not know who the woman was and he [Msgr. Viganò] snuck her in to say hello to me — and of course they made a whole publicity out of it. And I was horrified and I fired that Nuncio.”

One of them is lying: either Cruz or the Pope? What is certain is that the Pope knew very well who Davis was, and he and his close collaborators had approved the private audience. Journalists can always check, by asking the prelates Becciu, Gallagher and Parolin, as well as the Pope himself.

It is clear, however, that Pope Francis wanted to conceal the private audience with the first American citizen condemned and imprisoned for conscientious objection.

The Vatican has issued a joint statement by Rev. Federico Lombardi and his English-language assistant, the Rev. Thomas Rosica, pushing back on Viganò’s claims.

The AP reports: ‘In the joint statement Sunday, Rosica transcribed what he said were handwritten notes from a meeting he and Lombardi had with Viganò the following evening. In those notes, Rosica quoted Viganò as telling them that the pope had actually chastised him for “deceiving” him with the Davis encounter, and for having withheld the fact that Davis had been married four times. In his part of the joint statement, Lombardi said Viganò initiated the Davis meeting, should have known about the furor that it would cause, and that even though Vatican officials approved of it, they were not sufficiently informed about the significance such a meeting would take on.’