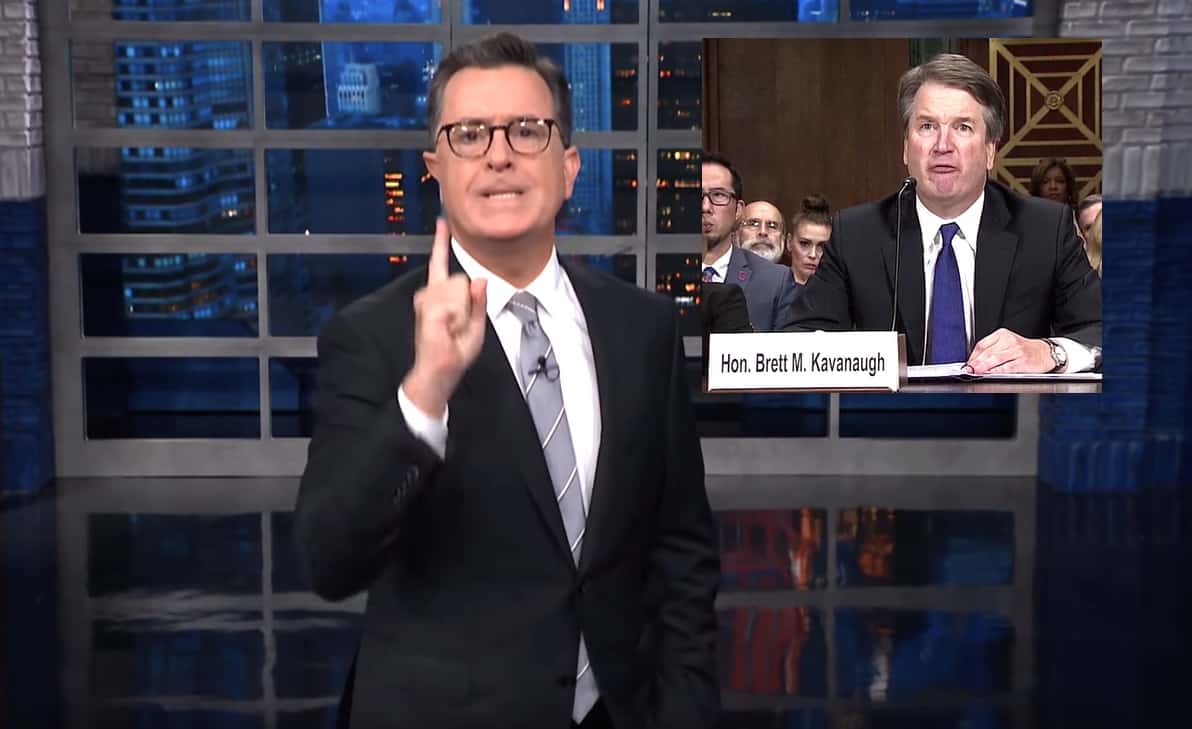 Said Colbert: “Her testimony was deeply moving. Don’t take my word for it — ask the liberal snowflakes over at Fox News.”

Colbert then played a clip of FOX News pundits lauding Ford’s credibility which finished with Chris Wallace saying, “This is a disaster for the Republicans.”

Quipped Colbert: “Although, to be fair, their last disaster is president right now.”

Colbert added that Ford’s “testimony was believable and heartbreaking, and word is Trump was telling people he’s furious what White House aides didn’t have advance knowledge of how credible Ford would seem.”

Replied Colbert, in Trump voice: “Look, how come none of you told me it was possible to speak without embarrassing yourself?”

Colbert went on to assess Dianne Feinstein’s assertion that it was not a trial of Dr. Ford but a job interview for Kavanaugh, and mocked Chuck Grassley’s attempt to be accommodating to Ford, telling her to let him know if there’s anything she needs.

Said Colbert: “Okay, how about an FBI investigation?”

Colbert also noted that Ford said she didn’t need a break because she had coffee: “All she needed was coffee? I was just watching, and I needed a venti Xanax.”

Ford also very scientifically explained to Feinstein how she knew it was Kavanaugh who was trying to rape here: “The way that I’m sure I’m talking to you right now, it’s just basic memory functions and also just the level of norepinephrine and epinephrine in the brain.That neurotransmitter encodes memories into the hippocampus so that trauma-related experience is locked there, so other memories just drift.”

Colbert then looked at the grilling of Ford by prosecutor Rachel Mitchell, who tried to get Ford on her fear of flying.

Said Colbert: “So what? Being afraid of flying doesn’t mean you never fly. It means you hate it while you’re doing it, like everyone else — in coach.”

Senator Orrin Hatch was asked to react to the Ford testimony and called her “attractive” and “pleasing,” while Lindsey Graham threatened Democrats to “watch out for your nominees” if this is the “new norm.”

Snapped Colbert: “Yeah Democrats. If you’re not careful, pretty soon there will be no – accused – sex offenders – in government!”

Colbert then moved to Kavanaugh’s testimony in his coverage of “one of the longest days I can remember…and I’ve been to a Renaissance fair.”

Kavanaugh blamed the Clintons for his treatment, saying, “The whole two-week effort has been a calculated and orchestrated political hit, fueled with apparent pent-up anger about President Trump and the 2016 election, fear that has been unfairly stoked about my judiciary record, revenge on behalf of the Clintons.”

Colbert explained: “I will be a non-biased and impartial judge, just an umpire calling balls and strikes being secretly thrown by George Soros and Hillary Clinton.”

Colbert also looked at Kavanaugh’s claim that “The behavior of several Democratic members of this committee at my hearing a few weeks ago was an embarrassment. But at least it was just a good old fashioned attempt at Borking.”

Mocked the Late Show host: “I have partied with Spuds Mackenzie. I have partied with the Budweiser frogs. I have ridden on that Silver Bullet train. Any beer companies out there looking for a spokesman you know where to find me. Dilly dilly wasssuuuuuup.”

Quipped Colbert: “After all, isn’t one man’s blackout another man’s street nap?”

Colbert also looked at Lindsey Graham’s tantrum. He “went off.”

Replied Colbert: “Wow. Somebody really grew a pair when the scary doctor lady left the room.”

But Colbert’s explanation for Kavanaugh’s “boofing” yearbook line, which the judge explained referred to “farting,” was really something: “If you look it up online, boofing refers to the practice of anally ingesting alcohol or drugs.”

Finally, Colbert concluded by looking at Kavanaugh’s warning that the country would “reap the whirlwind” for decades to come if he’s not lifted to SCOTUS.

Said Colbert: “You really need a better weatherman because- let me tell brother, this is the whirlwind. And the wind was sown when Donald Trump had 19 credible allegations of sexual assault against him, bragged about sexual assault on tape, and your Republican buddies up on that committee said, ‘Yeah, but we want our guy on the Supreme Court.’ And that’s you, Brett. That doesn’t mean you’re guilty, but please, save your indignation that finally someone is taking one woman’s accusation of sexual assault seriously.”