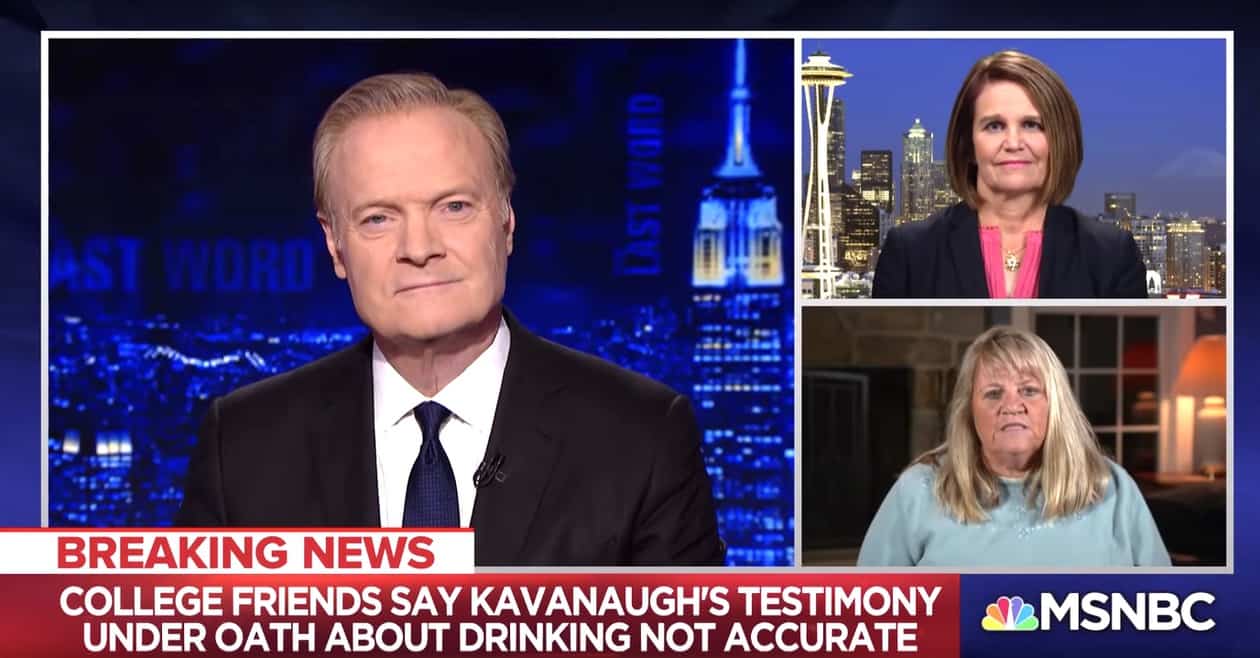 Liz Swisher and Lynne Brookes spoke to MSNBC’s Lawrence O’Donnell about their experiences (below).

Charles Ludington, a Yale classmate of SCOTUS nominee Brett Kavanaugh who spent time drinking with the judge, released a statement on Sunday night to the press, accusing Kavanaugh of lying under oath about his drinking.

Ludington said in the statement that Kavanaugh was a belligerent, aggressive drunk who hung out with jocks, drank other alcohol products in addition to beer, and he once saw Kavanaugh throw a drink in a man’s face as a response to a semi-hostile remark.

Wrote Ludington: “In recent days I have become deeply troubled by what has been a blatant mischaracterization by Brett himself of his drinking at Yale. When I watched Brett and his wife being interviewed on Fox News on Monday, and when I watched Brett deliver his testimony under oath to the Senate Judiciary Committee on Thursday, I cringed. For the fact is, at Yale, and I can speak to no other times, Brett was a frequent drinker, and a heavy drinker. I know, because, especially in our first two years of college, I often drank with him. On many occasions I heard Brett slur his words and saw him staggering from alcohol consumption, not all of which was beer. When Brett got drunk, he was often belligerent and aggressive. On one of the last occasions I purposely socialized with Brett, I witnessed him respond to a semi-hostile remark, not by defusing the situation, but by throwing his beer in the man’s face and starting a fight that ended with one of our mutual friends in jail.”

Ludington suggested that what he knew about Kavanaugh and had seen over the past week does not jibe with what is acceptable behavior for a federal judge: “I do not believe that the heavy drinking or even loutish behavior of an 18- or even 21-year-old should condemn a person for the rest of his life. I would be a hypocrite to think so. However, I have direct and repeated knowledge about his drinking and his disposition while drunk. And I do believe that Brett’s actions as a 53-year-old federal judge matter. If he lied about his past actions on national television, and more especially while speaking under oath in front of the United States Senate, I believe those lies should have consequences. It is truth that is at stake, and I believe that the ability to speak the truth, even when it does not reflect well upon oneself, is a paramount quality we seek in our nation’s most powerful judges.”

Kavanaugh lied under oath, said Ludington: “I can unequivocally say that in denying the possibility that he ever blacked out from drinking, and in downplaying the degree and frequency of his drinking, Brett has not told the truth.”

Ludington also said he would be sharing this information with the FBI.