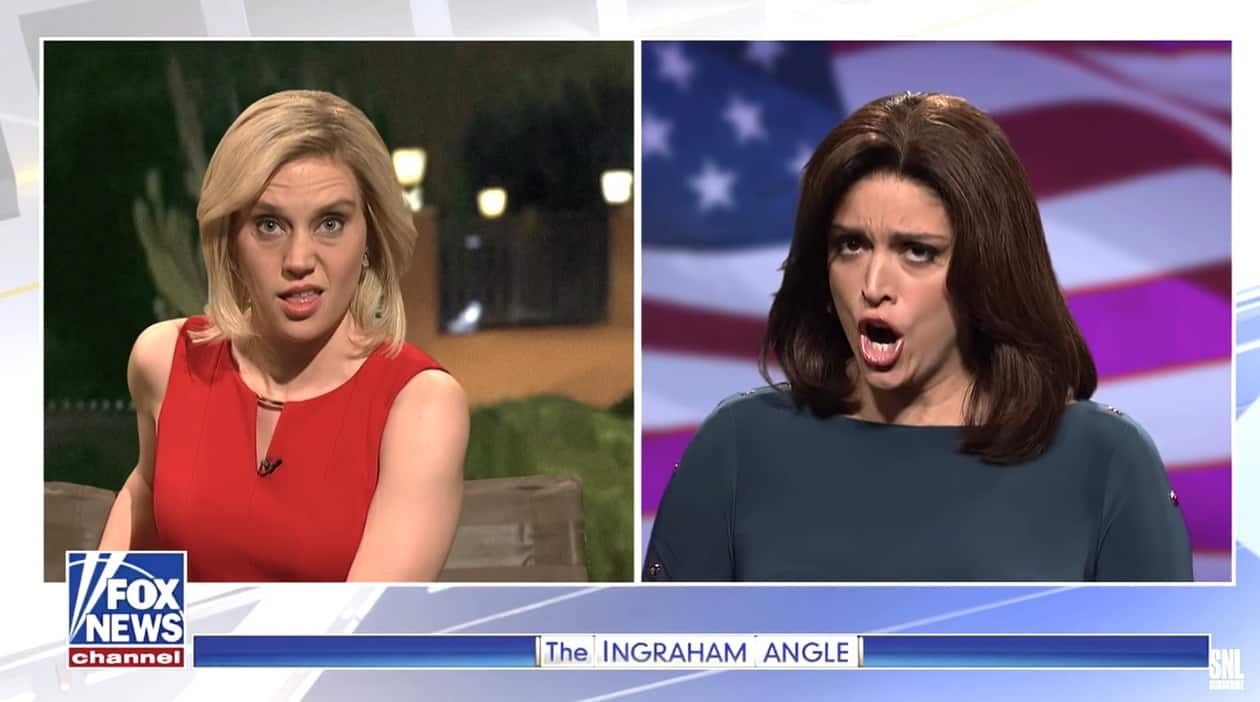 Said McKinnon’s Ingraham of Trump’s plans to defend the U.S. border: “Of course the liberal media’s trying to label President Trump a racist. But except for his words and actions throughout his life, how is he racist? All of a sudden the word ‘nationalist’ is bad, the word ‘white’ is bad, the phrase ‘white nationalist’ is bad! When I think of white nationalist I just think of a fun Fourth of July barbecue, the kind you don’t have to call the cops on.”

Strong’s Jeanine Pirro was then introduced and asked about the caravan:

“I haven’t just heard about it, I’ve seen it with my own eyes,” intoned Strong’s Pirro, playing footage of a Black Friday shopping stampede. “Take a look at this footage of the caravan from earlier today…It’s got Guatemalans, Mexicans, ISIS, the Menendez brothers, the 1990 Detroit Pistons, Thanos and several Babadooks.”

“No question,” there are Middle Eastern people too, Strong’s Pirro added. “This caravan’s got hella Aladdins. They took the very common direct flight from Iran to Guatemala, they claimed their elephants as service animals and then rode them straight into Mexico. It makes too much sense.”

Strong’s Pirro then showed more “footage” of  the caravan which was a clip from the zombie flick World War Z.

Ingraham then thanked her sponsors: warm ice cream, My Hemorrhoid Donut, and White Castle (“a castle for whites? yes, please”).

Ingraham then welcome former Milwaukee sheriff David Clarke, played by Kenan Thompson, who showed more “footage” of the caravan consisting of thousands of crabs skittering across a beach.

“My God, and those are humans?” asked McKinnon’s Ingraham.

“Basically, yeah,” responded Thompson’s Clarke. “We’ve basically learned that all the women in the caravan are more than nine months pregnant. And they’re holding the babies in until the exact moment they cross the border and then they’re literally gonna drop anchor. And get this. The babies are pregnant.”

The tips? “Never Vote on Tuesdays…ballots can be confusing -if you see an R on the ballot that means ‘really a Democrat’ and the letter D means ‘dassa Republican, and tip three, you already voted. You might not remember, but you did.”