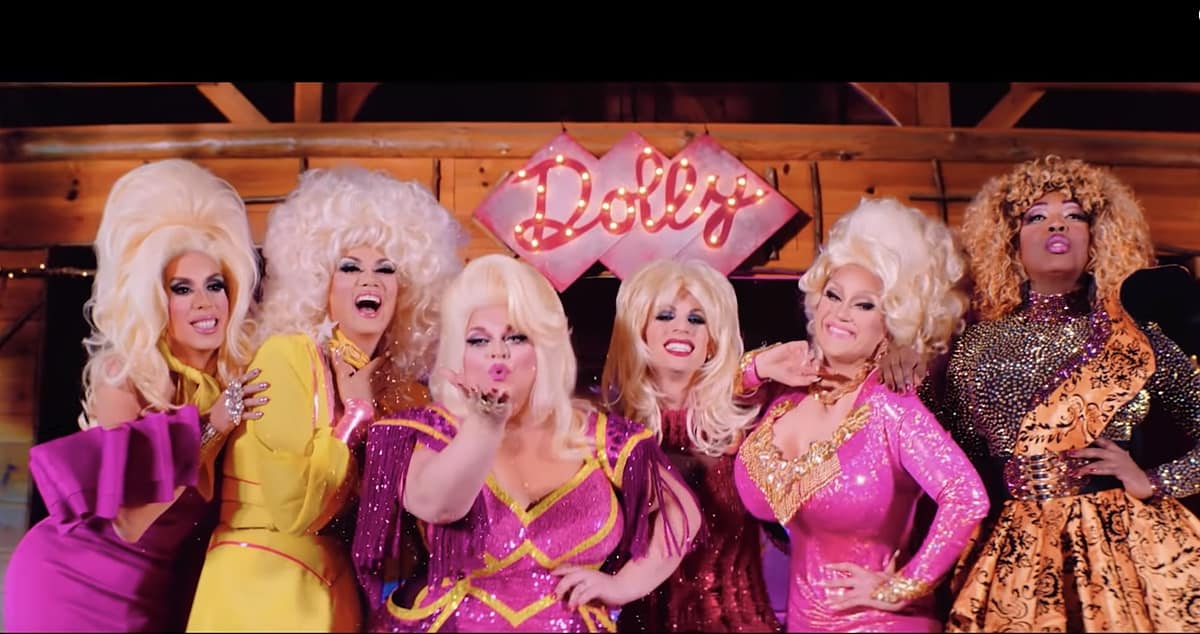 Dumplin revolves around Parton’s female empowerment songbook, THR reports: ‘Based on the 2015 YA novel by Texas-based author Julie Murphy, Dumplin’…tells the story of Willowdean Dickson, the overweight daughter of a former pageant winner slash current pageant host, who signs up for her mom’s Miss Teen Blue Bonnet pageant as a tribute to her late Aunt Lucy, whose intense Dolly fandom Will-for-short inherited. Lucy’s attendant supreme self-confidence (having taken the gospels of Dolly to heart), however, has proved harder to absorb. The film, starring Jennifer Aniston and Patti Cake$ breakout Danielle Macdonald, features big hair, cute boys, dance numbers and a whole host of other hooks to hang a Parton needle drop on.’

Ginger Minj has a role in the film, as a drag queen who teaches Dumplin’ about body positivity.

Minj spoke to OUT about being in the film, and the times she has met Dolly: ‘I met her when I was younger because my family used to go to Dollywood twice a year – back when we were a happy family, before my father abandoned us. That’s my story. It’s coming out on Netflix later. [laughs] We used to go all the time, and I remember we went for an album she had just debuted that she was doing a whole concert version of it at Dollywood. I was young and cute at the time. So, of course I got to meet her for a second, and I just remember that she smelled like the color pink. I don’t know how to describe it other than like if pink had a smell, it would be her. So, I was so excited to meet her again. Then, when we were on set for Dumplin’, she came in, and I was like, “That’s it. That’s that smell.”’

And Dolly has given her stamp of approval to Minj and the Drag Race crew who took on her song.

Go to the Smoky Mountains, they said. It'll be fun, they said. 😂 😂 Thanks to @TheGingerMinj and all the other queens in this new Jolene video! #DUMPLINhttps://t.co/mPxNHy6UoX

Previous Post: « Seth Meyers Knows How the Feds Will Find and Arrest Donald Trump: WATCH
Next Post: Trump Cancels White House Christmas Party for the ‘Enemy of the People’ »