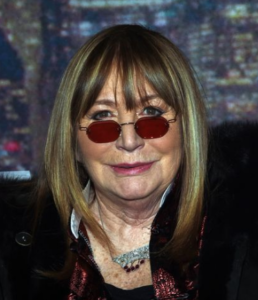 The iconic star of Laverne & Shirley and the director of the hit film A League of Their Own, Penny Marshall, died of complications from diabetes at age 75 in Los Angeles on Monday. Her publicist confirmed her passing to  The Hollywood Reporter.

Rosie O’Donnell who starred in Marshall’s League took to Twitter to mourn her friend and posted some of the funniest clips of Marshall from an episode of SNL that O’Donnell hosted featuring musical guest Whitney Houston.

The sketch features O’Donnell playing a strict Catholic nun and Marshall as the musical director who can’t seem to stay awake (also worth it for comedian Molly Shannon doing her iconic Mary Katherine Gallagher character).

The two women were very close and even appeared in a 1996 K-Mart commercial that although is very funny O’Donnell wrote: Simply heartbroken. #ripPENNY

O’Donnell retweeted a remembrance from their mutual friend Madonna who also starred in League. Madonna said : “So Lucky to have known you and worked with you Penny Marshall!! Your Talent was as BIG as your Heart!  and you were aTrailblazer For Women In Hollywood! GOD BLESS you and your family! #pennymarshall #leagueofthierown”

So Lucky to have known you and worked with you Penny Marshall!! ♥️ Your Talent was as BIG as your Heart! ♥️ and you were aTrailblazer For Women In Hollywood! 🙏🏼 GOD BLESS you and your family! #pennymarshall #leagueofthierown pic.twitter.com/2HWs19UM8C

One of the most powerful women in Hollywood, and one of a handful of female producer/directors who could get a picture made, Marshall was a trailblazer.

The Bronx born Marshall was the younger sister of writer/producer Garry Marshall who gave Penny a guest role as Laverne DeFazio (who’s introduced with her best friend Shirley Feeney played by Cindy Williams) on his highly rated series Happy Days.

The duo proved so popular that ABC launched a  spin off about starring the two women that ran for eight seasons. One of the famous and fan favorite parts of the show was the opening with the two women reciting a Yiddish-American hopscotch chant: “1, 2, 3, 4, 5, 6, 7, 8 Schlemiel! Schlimazel! Hasenpfeffer Incorporated,” which then leads into the series’ theme song, “Making Our Dreams Come True” performed by Cyndi Grecco.

I always loved the opening because it was the only place I heard Yiddish outside of my grandmother’s house. My grandmother told me that a schlemiel was the guy who spilled his soup and schlimazel was the guy he spilled the soup on. Newsweek did a story following Marshall’s death that investigated the meaning of the words and said, “schlemiel refers to an unlucky bungler while schlimazel is a consistently unlucky person. The terms are Yiddish in origin and are often used in a humorous manner. As for the word used in the second half of the phrase, Hasenpfeffer, it is actually the name of a German stew, according to Huff Po.”

While Marshall was not openly gay she was very visible friends with both O’Donnell and Madonna and her sometimes charming butch demeanor and raspy smoker’s voice made her somewhat of a gay icon. Into‘s headline of Marshall’s passing reads, “Penny Marshall Was a Lesbian Icon, Even If She Wasn’t Gay.” The piece goes on to say, “Although she was married to men twice and had one daughter, Tracy, late-in-life lesbian rumors swirled about Marshall, most of which she seemed to take as a compliment. (Often, she was said to have been involved with the late Carrie Fisher, a close friend. In 2002, Fisher told Out she had a National Enquirer piece about the rumored relationship hanging on her fridge along with the quote: ‘We’re not lesbians, we’re loonies!’)”

Prior to her death, and battle with complications from diabetes, Marshall  was also diagnosed with lung and brain cancer in 2009.