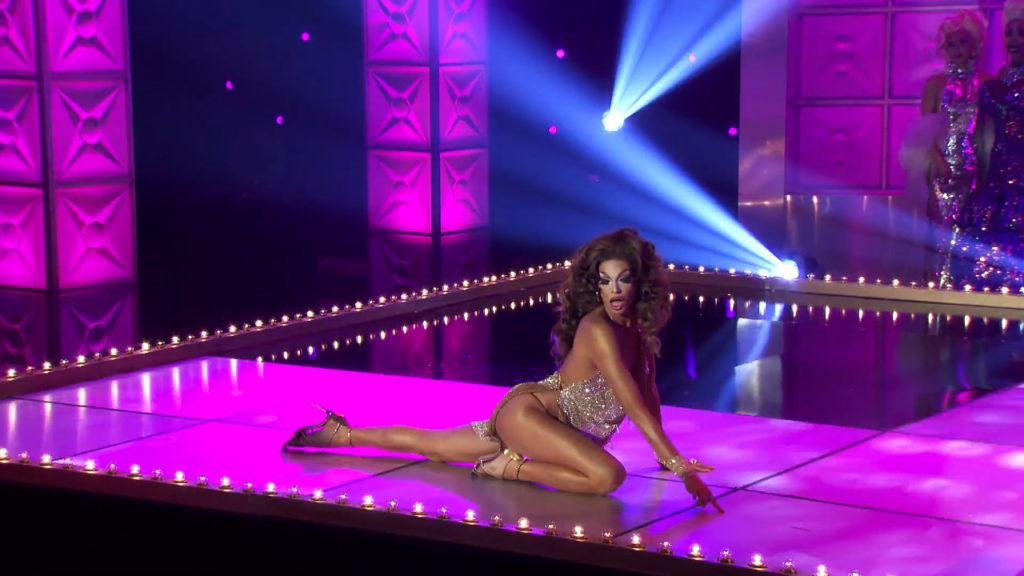 It’s true the best girl groups are not without their drama. Look at Destiny’s Child, TLC, the Supremes, Fifth Harmony, Danity Kane, the Spice Girls … the list goes on and on. So, of course, this week’s girl group-themed episode of RuPaul’s Drag Race All Stars was going to deliver a classic catfight.

There was no mini-challenge (booooo!), so we were thrust right into this week’s main challenge. The gals were tasked with splitting into two teams, writing verses, recording, choreographing and performing a lip sync for the judges.

On the surface, it seems odd that Gia would be a less desirable choice than the struggle Farrah. However, it’s quickly clear that this may be more of a comment on Gia’s attitude, instead of her talent.

As Trinity’s team sits down to brainstorm, Gia spills all the T. She says she’s got beef with Farrah, because, in so many words, Farrah got involved in a conflict Gia was having with someone else. Then Farrah and this other person showed up drunk at Gia’s show, caused a scene and Farrah never returned Gia’s text about it.

The worst part about it isn’t even the pettiness (I am, personally, a petty bitch who LOVES drama). The problem lies in the storytelling itself. Who is this mysterious other person? Was it another queen? An ex? Individual-1? How did they make a drunk scene? What did they say? The drama is in the details, henny.

Speaking of henny … Ru announced that both teams would be joined by season three queen Stacy Layne Matthews. Everyone’s gagged, except me. Not that I wasn’t charmed by Stacy, but is she really that big of a deal? Next to Latrice and Valentina, it just seemed … fine. No shade, but I don’t think Stacy would win an All Stars season, let alone be a worthy very special guest. And am I the only one who didn’t realize she made “henny” happen? It feels like it hit cultural consciousness years after her season. Don’t go rewriting herstory on me, Ru.

As Team Trinity works on their recording and choreo, a few problems arise. Gia struggles with both her singing and lyrics. Manila turns it up to about a 3; lacking energy and presence. The clear stand-out on the team is Valentina’s bonkers, dual-language performance.

Monique’s group has their share of problems as well. Farrah can’t sing or dance, which is a pretty big obstacle in this kind of performance. Monique really pushes herself in the vocal portion, while Monet and Naomi seem to have no problem keeping up.

In the work room, Gia confronts Farrah. It’s a desperate move, which Farrah deflects with shocking ease and resolve. For a queen who’s so well known for falling apart, Farrah has nerves of steel. She never breaks from applying her makeup as Gia does her best to shake her under the guise of repairing their friendship. Farrah won’t take the bait, eventually shutting Gia down with the next great Drag Race takedown, “Some of us don’t have to, you know, force storylines to get their airtime.” 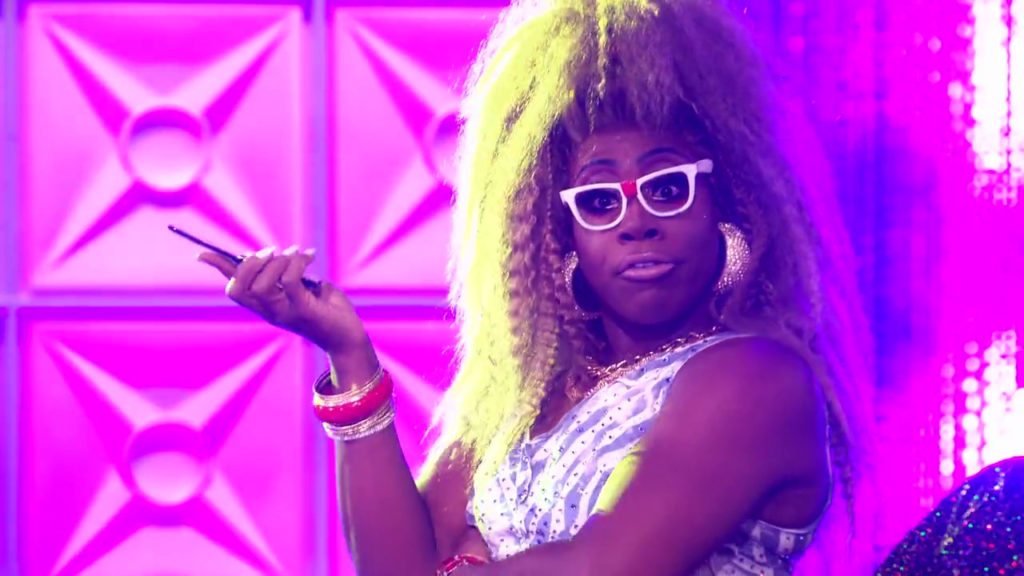 If only Farrah brought that same energy to the stage. Instead, her team is a bit all over the place. The choreo is shambly and Monique struggles to get her jacket off, but Naomi delivers an expert performance and Monet dazzles with her rap skills. Team Trinity is a bit more consistent overall, but Gia and Manila fail to impress.

It’s really all about Valentina. Her cuckoo verse and Selena-inspired outfit are home runs. It’s impossible not to focus on her during Team Trinity’s number.

The theme for the runway is “eloguence after dark” and all the girls come correct. We’ll dive deeper into individuals in the rankings below, but Naomi, Manila, Valentina and Trinity are standouts.

Surprisingly, it’s Farrah and Monique placed in the bottom two. Monique’s failings appear to be more about her polish than her performance. Monet finally gets her first ever Drag Race win alongside Valentina.

As the girls untucked backstage, Farrah and Monique pled their cases. Monique is very convinced of her own greatness, which will definitely be her eventual undoing. Farrah, meanwhile, appealed to her personal relationship with Valentina to lobby for the win.

Gia couldn’t help but prove Farrah extremely correct as she interrupted her time with Monet to try and fix the relationship in case this was their last day together. (The shade of it all … )

The real gag of the episode (and maybe the season) is tonight’s lip sync. It’s set to Ariana Grande’s “Into You,” a very unsubtle nod to the “Greedy” lip sync that ruined Valentina.

She didn’t struggle this time. She looked unbelievable, unspeakably good, and she was giving it her absolute all. (Or, her everything, if you will.) Monet is also surprising us. Instead of her leaping fake-out, she gives us a thunderous leaping split that thrills. The mid-tempo track favors Valentina’s sensuality, and she locks up the win.

She chooses to send Farrah home, and the two exchange a sweet “You don’t love me” callback to their season nine reunion. On the way out, Gia goes to hug Farrah and tell her she loves her. Farrah shoots back a “No, you don’t” as she exits, cementing a fresh drama that will surely get ample time to air at the finale/reunion.

But where do we stand now? Check out our (totally subjective) rankings below, then let us know your thoughts in the comments!

1. Even though Latrice barely registered this episode, she is still my pick to win the spot in the hall of fame. We’re long overdue for a big girl to win. We’re long overdue for a queen of color to enter the Hall of Fame. Even just looking over this season’s cast announcement, Latrice was a clear frontrunner. If anything, being a safe, steady presence early in the season could indicate there are bigger things awaiting Ms. Royale in future eps.

2. Is there anything Trinity the Tuck can’t do? Armed with a firmer sense of self, Trinity knows how to balance all that body with some slapstick. She’s just got the best mindset and most balanced skill set of anyone here. She looked incredible in every outfit, performed with personality and didn’t take any dramatic bait in rehearsals or the workroom. Her focus is clear, and, if she can maintain that steadfast attitude, she’ll make it far this season.

3. Make no mistake, this was Valentina‘s episode. It’s hard not to believe the fix was in for her to win the challenge and get her chance at redemption not on just any lip sync, but an Ariana Grande lip sync, specifically. Tin foil hats aside, she earned the wins today. Her verse was uniquely strange, but wholly entertaining. She looked unreal amazing in both her floral gown and the slinky, silver slip of nothing she wore to lip sync. She was head-to-toe flawless. Is Valentina the most beautiful queen in Drag Race herstory? Possibly! And, man, did she turn it all the way out in that lip sync. There was no contest. Barring a disaster on par with her legendary lip sync fail, Valentina is a strong contender for the win.

4. I was initially surprised by Naomi Small‘s performance tonight, but then I remember season 8. She was a dark horse then, and she’s one now. It felt like even the editors forgot about her, opting to not show her recording her verse, but she really brought it on the main stage. Her performance was sharp, and she always looks the most fierce. Don’t be surprised to see her in the finals.

5. It’s good to see Monet stepping her fashions up, but consider me less impressed than the judges with her eloguence. She beautiful, but not stunning. It was nice, but it wasn’t a MOMENT. Monet will never be a lewk queen, so hopefully her improved fashions will be enough to keep her around while she slays what she really does best (comedy and performance).

6. Manila is down, but hopefully not for long. Michelle’s critiques of Ms. Luzon were spot on. Where was that deranged “MacArthur Park” brilliance this week? I suspect it was her gorgeous gray gown that spared her from the bottom two. It’s early enough in the competition for her to get back from this, but she just didn’t show up this week.

7. While queens like Latrice and Valentina make incredible things look effortless, you can always see Monique sweat. She thirsty. And that’s part of why we love her! She wants to be the best, and she’s willing to work for it. The judges should have given her more credit for her vocal performance, but the Aaliyah homage felt sloppy and the runway look lacked refinement. Monique is an all star, for sure, but is she really more worthy of a spot in the Hall of Fame over some of these other girls? Sorry, but, facts are facts, America.

8. Drama aside, Gia did not deliver this week. Her kabuki performance was iconic, but both her inspirational (and sort of nonsensical) verse and her runway look left me wanting. Or maybe it was just hard to root for her after watching her victimize Farrah all episode. As Monet said (and I wrote last week) targeting Farrah is classic “punching down.” It’s not a good look. Worse yet, Farrah bested her at every turn of their exchange. If you’re going to be the villain, you’ve got to do it well.

9. Farrah Moan came here to prove a point, and her time on All Stars did just that … it just wasn’t the point she was hoping to make. She felt out of her league since her arrival. It’s not that Farrah isn’t talented and beautiful. She could have a very successful career ahead of her. However, she’s just too young and inexperienced to bring the sophistication that folks like Latrice, Trinity and Manila showcase in their drag. It takes very special talent (*cough*Valentina*cough*) to be so fully realized so young. Farrah lagged in the choreo and failed to shine in the performance. Her runway look was striking, but her slow, nervous walk trying not to trip looked incredibly amateur. By contrast, Monique’s sins this week were minimal. It was time for Farrah to go.