‘Single All the Way’ gets 5 stars :Michael Urie, Jennifer Coolidge and….

The Knocks Do the 90s (with Foster the People) “Bittersweet Symphony”, Moby/Gwen, and Beck.

Boulder (United States) (AFP) – President Joe Biden called Tuesday for a US ban on assault weapons, after the country’s second mass shooting in a week left 10 people dead in Colorado and sparked urgent new calls for gun control. Addressing a nation long traumatized by gun massacres in schools, nightclubs, movie theaters and many other public spaces, Biden said he did not “need to wait another minute, let alone an hour, to take common sense steps that will save lives in the future and to urge my colleagues in the House and Senate to act.” “We can ban assault weapons and high capacity magazines …

“Desperate to avoid his family’s judgment about his perpetual single status, Peter (Urie) convinces his best friend Nick (Chambers) to join him for the holidays and pretend that they’re now in a relationship. But when Peter’s mother sets him up on a blind date with her handsome trainer James (MacFarlane), the plan goes awry.”

“What I love most about this hysterical, moving project is that it is simply a genuine holiday romantic comedy that explores friendship and love between gay men,” said Rice. Mayer noted it was “really gratifying to tell a story that happens AFTER coming out!”

By Akira Tomoshige TOKYO (Reuters) – Jenny and Narumi wept for happiness last week when a Japanese court ruled that barring same-sex marriages was unconstitutional, a decision that allowed them to move a step closer to a legal marriage and starting a family. The ruling by the Sapporo district court, the first in Japan on the legality of same-sex marriages, was a major symbolic victory in Japan, the only country in the Group of Seven major nations to not fully recognise same-sex partnerships. For Jenny and Narumi, who plan on a life together and have held a non-legally binding marriage ceremony…

!! OMG, these pups are ready for spring and diving-in NOSE FIRST! !!

Katy Perry has hinted at a musical collaboration with Taylor Swift. The ‘American Idol’ judge was inspired by two female contestants on the reality singing competition series to create a duet with Taylor, with whom she previously had a feud with. Contestants Althea Grace and Camille Lamb sang a cover of Lesley Gore’s ‘You Don’t Own Me’ and as they were put through to the next round Katy told them: “That’s what queens do.” Katy then turned to her fellow judges, Luke Bryan and Lionel Richie, and asked: “Can you imagine if Taylor and I work together, what we could do?” A number of fans have since…

Chris Columbus has confirmed the existence of an R-rated version of ‘Mrs. Doubtfire’. The director has admitted to shooting a number of alternative scenes for the 1993 comedy film, which starred Robin Williams as a nanny called Euphegenia Doubtfire. Chris shared: “The reality is that there was a deal between Robin and myself, which was, he’ll do one or two, three scripted takes. And then he would say, ‘Then let me play.’ And we would basically go on anywhere between 15 to 22 takes, I think 22 being the most I remember. “He would sometimes go into territory that wouldn’t be appropriate for a PG…

By Philip Pullella VATICAN CITY (Reuters) – The coronavirus pandemic should make governments realise that defence spending cannot guarantee security for their populations and should encourage them instead to divert funds to improve health care and fight poverty, the Vatican said on Tuesday. “The pandemic offers us a precious opportunity,” Cardinal Pietro Parolin, the Vatican’s Secretary of State and number two in the Vatican hierarchy, told a webinar on disarmament. “It (the pandemic) prompts us to question how much the huge military expenditures are really able to guarantee the security of in…

LONDON (Reuters) – A Banksy painting showing a boy playing with a toy nurse as a superhero sold for more than $20 million on Tuesday, setting an auction record for the elusive British street artist. “Game Changer”, unveiled last May at University Hospital Southampton, paid tribute to the frontline workers of Britain’s National Health Service (NHS) in their fight against the COVID-19 pandemic. The black-and-white hand-painted artwork shows a boy lifting a nurse, her arm outstretched and wearing a cape, while traditional superheroes Batman and Spider-Man lie in a bin. Through Southampton Hospita…

MIAMI – Curfews and causeway closures to control unruly spring break crowds in South Beach will be extended through April 12, the Miami Beach City Commission unanimously decided Sunday during an emergency meeting. An 8 p.m. curfew in South Beach’s entertainment district and a 10 p.m. shutdown of the eastbound lanes of the MacArthur, Julia Tuttle and Venetian causeways will remain in effect Thursday through Sunday for the remainder of spring break. Residents, hotel guests and local business employees are exempt from causeway closures on the MacArthur and Tuttle. The Venetian is resident-only du…

Democrats argue for US capital statehood at House hearing

Washington (AFP) – Congressional Democrats and Washington’s mayor made their case Monday for statehood for the US capital, proclaiming the disenfranchisement of DC residents one of the last glaring violations of American civil rights. More than 712,000 people live in the District of Columbia, a Democratic stronghold with a population greater than two states, Wyoming and Vermont, and comparable to two others. Its residents fight and die in US wars and face a higher federal tax burden than people in the 50 states. But while Washingtonians can cast ballots in US presidential elections, they are d…

Alongside ‘Bittersweet Symphony’, the EP features versions of Beck’s ‘Devils Haircut’ from 1996 and Gwen Stefani and Moby’s duet on ‘South Side’ from 1999.

By Asif Shahzad ISLAMABAD (Reuters) – A long white shawl on her head, Rani Khan gives daily Koran lessons at Pakistan’s first transgender-only madrasa, or Islamic religious school, which she set up herself using her life savings. The madrasa is an important milestone for the LGBTQ community in the overwhelmingly fundamental Muslim country, where transgender people face ostracism, even though there is no official restriction on them attending religious schools or praying at mosques. “Most families do not accept transgender people. They throw them out of their homes. Transgender people turn to w…

By Nate Raymond (Reuters) – The U.S. Supreme Court on Monday agreed to hear the federal government’s bid to reinstate Boston Marathon bomber Dzhokhar Tsarnaev’s death sentence for helping carry out the 2013 attack that killed three people and wounded more than 260 others. The Justice Department, before former President Donald Trump left office, filed an appeal of a lower court’s decision ordering a new trial over the sentence Tsarnaev should receive for the death penalty-eligible crimes for which he was convicted. The case presents a potential challenge for President Joe Biden, who has said he…

Aretha Franklin’s family have accused the producers of ‘Genius: Aretha’ of “disrespecting” them. The life of the late singing legend will be depicted in the NatGeo limited series, which airs this week with Cynthia Erivo in the lead role, but her relatives insisted their attempts to work with programme makers have been snubbed and they called on fans to boycott the show. Aretha’s granddaughter, Grace Franklin, said in a video shared to TikTok: “As the immediate family, we feel that it’s important to be involved with any biopic of my grandma’s life, as it’s hard to get any accurate depiction of … 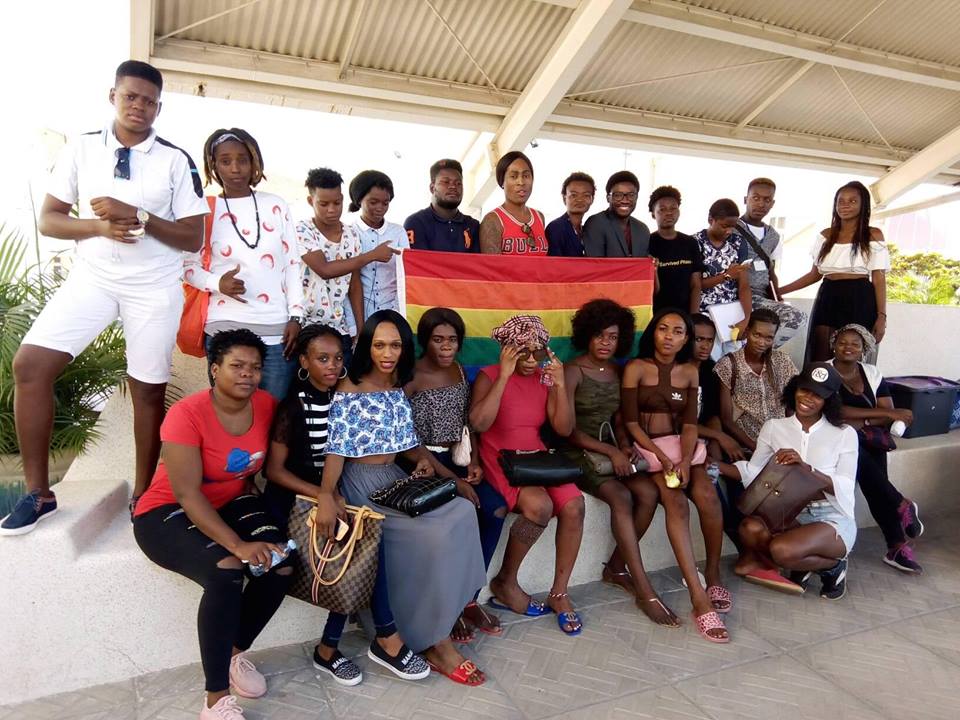 Members of the Association IRIS Angola. Photo from the organization’s archive, published with the author’s permission.

Angola’s new penal code, which decriminalizes relationships between people of the same sex and punishes homophobic violence, came into force on February 11.

The new legislation was approved in 2019 but only ratified in November 2020. It replaces the penal code of 1886, of the Portuguese colonial administration.

The code has removed a provision punishing those who “habitually indulge in the practice of vices against nature.”

It also introduces heavier punishments for violence motivated by discrimination on the basis of, among other things, sexual orientation. The law also punishes anybody who refuses to employ a person because of his or her sexual orientation with two years in prison.

The new code does not mention legal unions between people of the same sex.

Angola now joins the minority of African countries that do not criminalize consensual relations between adults of the same sex. In recent years, South Africa, Seychelles, Mozambique, Cape Verde, Malawi, Botswana, and Gabon have either judicially repealed or modified their laws in order to decriminalize such relationships.

In 2014, the African Commission on Human and Peoples’ Rights called on all African states to do the same:

Recognize the dangers of violence and other forms of discrimination against persons based on their actual or assumed sexual orientation and gender identity, and establish laws that protect LGBTIQ+ people from violence and discrimination as members of a vulnerable category, as called for in Resolution 275 of the African Commission on Human and Peoples’ Rights.

Angola, though, was ahead of Mozambique in permitting the registration of IRIS, an organization for the defence of sexual minorities, in 2018, something that Mozambique has declined to do with the organization Lambda.

Lambda works to educate and raise public awareness on the right to equality regardless of sexual orientation and gender identity. Since about 10 years ago, Lambda has been pressuring the Mozambican government to formally recognize the group as an “association,” without success.

The adoption of Angola’s new penal code, and so the decriminalization of homosexual relationships, drew various reactions, especially from those hoping that the law would bring more tolerance to Angolan society.

LGBTQ resistance across the planet: In a historic decision, Angola decriminalizes being LGBTQ in the country.

The law, which was ratified in November 2020, came into force this week and changes the African country’s penal code. The change also bans discrimination against LGBTQ people.

The change was seen as a move forward by human rights experts in the country, as activist Paula Sebastião told BBC Focus on Africa.

This penal code will allow us to meet different demands from now on, and it also allows us to open a conversation about work, which is one of the main struggles of the LGBTQI+ community…