James E. West, the ousted Mayor of Spokane, who hypocritically supported anti-gay legislation while frequenting gay chat rooms and allegedly offering city jobs to young men he met there, has died of cancer in Seattle at age 55. 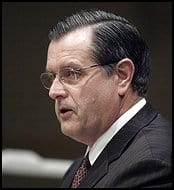 West’s internet activities were tracked by The Spokesman Review, which published its results in a scandalous exposé in spring 2005. West adamantly denied he had done anything wrong and refused to resign his office after the scandal broke. He was later forced from office by a recall petition circulated among citizens who were angry at the politician’s use of his office for personal benefit.

A figure in Washington politics for 20 years, West had the opportunity several times to advance gay rights causes: As Mayor of Spokane, West opposed domestic partner benefits for City Hall workers in 2003 yet the City Council voted for the measure with enough of a majority to withstand a mayoral veto. As Senate majority leader, he held up a gay rights bill in committee, where it died. West voted for the Defense of Marriage Act, defining marriage as between a man and a woman, and opposed gay rights bills in ’85 and ’87.

Yet when West’s activities with young gay men were exposed, the Mayor claimed that his sexuality and private activities on the Internet were off-limits, and he denied using city computers inappropriately while condemning the “brutal outing” that had soiled his name.

Later, in an email to one of his constituents, he said that God had forgiven him, and that was all he needed.

James West was recalled from office in December 2005.