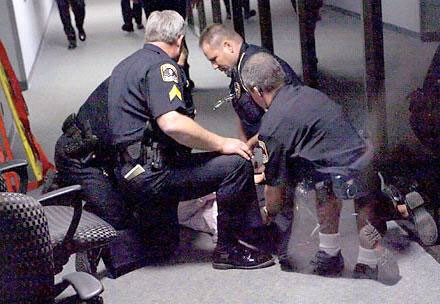 HRC and the National Gay and Lesbian Task Force today condemned the brutal arrest of Nadine Smith, the executive director of Equality Florida. Smith was arrested while trying to hand out a “Don’t Discriminate” flier at a hearing over Steve Stanton, the city manager recently fired because he had a sex change operation.

According to the National Gay and Lesbian Task Force: “The arrest occurred when Charlie Deppish of Tampa approached Smith and asked her for a flier that said only ‘Don’t Discriminate.’ According to witnesses, Sgt. Butch Ward confronted Smith in the lobby and ordered her to take back the flier. When Smith asked why, Ward reportedly forced her into a side room where several officers violently shoved her to the floor and arrested her. She has been charged with resisting arrest with violence, a felony, and disturbing others’ assembly, a misdemeanor. Smith has been executive director of Equality Florida, the state’s leading LGBT advocacy organization, since 1997 and is nationally recognized for her leadership.”

Deppish told the St. Petersburg Times: “If she was upset and struggling … I wouldn’t blame her. She was being manhandled.”

Matt Foreman, exectuive director of the NGLTF, blasted Largo law enforcement: “We condemn this outrageous and unprovoked attack on one of our community’s leading advocates. This directly associates the Police Department of Largo with the appalling bigotry expressed by the hundreds attending the poisonous hearing attacking an outstanding public servant, Steve Stanton. We honor Nadine’s courage and dignity through this ordeal.”