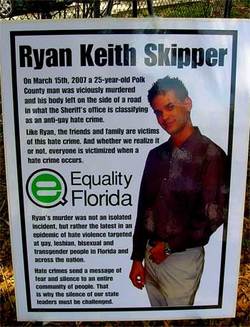 Florida’s Freedom Democrats reports that over 1,000 people attended vigils in 14 cities across the state and in Washington DC over the weekend to draw attention to hate crimes and, more specifically, the brutal murder of Ryan Keith Skipper in central Florida in mid-March. The vigils were organized by Equality Florida and Pridelines Youth Services

Skipper’s body was found by the side of a rural road near Winterhaven, Florida with more than 20 stab wounds. As I reported late last month, two men have been indicted for the murder.

According to the Freedom Democrats, “The [Miami Dade] Vigil started at 1:00 pm and was held at Pridelines Youth Services. David Cornell, Director of Development at Dade Community Foundation opened the vigil with comments on hate crimes in Miami Dade. Stratton Pollitzer, Deputy Director of Equality Florida, continued with statements regarding hate crimes across Florida and continued inaction from legislators in Tallahassee to address a comprehensive hate crimes bill for Florida.”

At 1:20 pm the group held a minute of silence to symbolically observe the moment (it was actually 1:20 am) at which Ryan Skipper’s body was discovered 30 days earlier.

Said Chip Arndt, President of Freedom Democrats: ““It is 2007 and we are still arguing whether we should protect GLBT US citizens in Florida and across this country. This vigil honored a loving human being and was very sad. Shame on our government officials and shame on all of us for not standing up for each and every person to be who they are; sticking our heads in the sand is immoral and leads to a generation of youth who think it acceptable to discriminate against others unlike them. I am outraged and it is time to hold every public official accountable for their silence on rights and protections of GLBT peoples.” 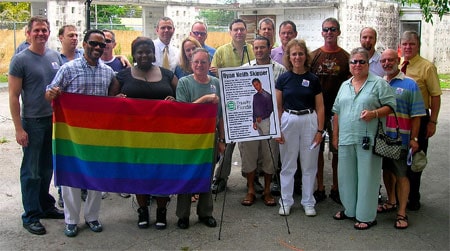 A few of the Miami Dade vigil attendees.

Information on where to send support to the family of Ryan Skipper, follows after the jump…

Letters of support and donations to the family of Ryan Keith Skipper can be sent to: