Deposed radio host Don Imus says he’s suing CBS for the $40 million remaining in his contract: ” Imus has hired one of the nation’s premiere First Amendment attorneys, and the two sides are gearing up for a legal showdown that could turn on how language in his contract that encouraged the radio host to be irreverent and engage in character attacks is interpreted, according to one person who has read the contract. The language, according to this source, was part of a five-year contract that went into effect in 2006 and that paid Imus close to $10 million a year. It stipulates that Imus be given a warning before being fired for doing what he made a career out of – making off-color jokes.” 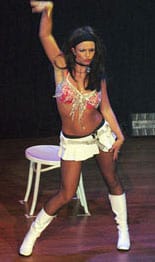 Britney stages San Diego comeback. And then follows it up in Anaheim.

Scott Schweickert, a Florida man who in 2003 used drugs to rape and torture two young men, has been sentenced to 40 years in prison.

Bette Midler, setting up shop in Las Vegas, says she’s a bit intimidated by the scope of it: “The stage is so enormous there’s a terror that you might not be able to fill it all by your lonesome, you know, a little person in high heels. And it’s got the biggest (video wall) in the world, and you say, ‘What the heck am I going to put on that? My baby pictures?” 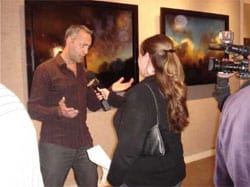 I know you’ve been wondering what The Real World‘s gay housemate Norman Korpi has been up to. He’s been preparing for a show of his paintings, and they’re now up at Creative Galleries in the Helms Building in Los Angeles.

Seattle’s The Stranger takes a look at the mess that is Seattle Gay Pride: “The annual paroxysms of doubt about whether the event will even happen at all. The ensuing existential crises within the gay community “leadership.” The announcement, this year, of a bankruptcy filing by parade organizers—and then the subsequent announcement, just hours later, that the bankruptcy filing would not be happening. And of course, the all-out war between gay factions over the parade’s location, with the supporters of a downtown parade in one camp and the supporters of a Capitol Hill parade in the other. Angry words and recriminations fly back and forth between them, in private and in public. It’s enough to make a homo want to stay home on parade day.”

People in the world are walking 10% faster than they did 10 years ago, according to a new study. Singapore is the fastest city. NYC ranks eighth.