An internal investigation is underway at the Rochester, New York police department after victims of a brutal gay bashing say police took them into custody instead of arresting their attackers: 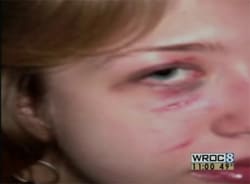 “According to the alleged victims, they were on Goodman Street early Friday morning when the attack took place. They called police, but they say instead of arresting their attackers, cops took three of them into custody. One says an officer slashed his toe with a knife, another says an officer referred to her as a ‘drunken dyke.'”

Rochester Councilman Bill Pritchard spoke to WROC: “When something like this does happen it causes everybody and certainly it caused me to pause and certainly register a certain amount of shock. I will not rest until I know with certainty all appropriate action has been taken. Your city government is on top of this, the mayor’s office, the police department, the chief of police, myself, the city council, the council president. Your city government is being very responsive and taking immediate action to investigate what happened.”