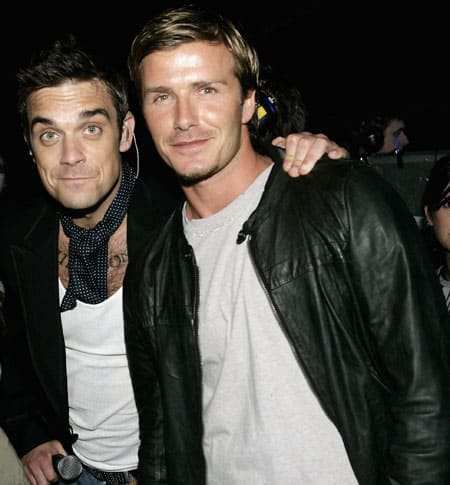 It’s the tease of the upcoming television season, and if true, would likely generate as much advance hype as Mario Lopez’ backside.

Said Cherry: “David’s keen, but the obvious choice was to work with Tom Cruise. We wanted someone who matches him in height and Britishness, so Robbie is the one. They’re both funny, game for a laugh and ridiculously macho, so it should work wonderfully. The English are pitch-perfect for sending themselves up.”

There has been no confirmation that either Beckham or Williams are signed on to the show, so this all may be a pipe dream from Cherry designed to generate some buzz, or at least to generate reaction from the stars themselves.

All this may conflict with Beckham’s schedule should he ever start doing what he came here for.

Previous Post: « Rearview Mirror: Looking Back at the Week on Towleroad
Next Post: NYC Firefighter Calendar Canned After Michael Biserta is Exposed »