Florida GOP state Representative Bob Allen was sentenced today to six months supervised probation and ordered to pay a $250 fine related to a misdemeanor conviction of solicitation of prostitution. The jury heard evidence last week related to his arrest in July and found the lawmaker guilty late Friday. Allen was arrested July 11 after allegedly offering a plainclothes police officer $20 for the opportunity to performer oral sex in a public men’s room. 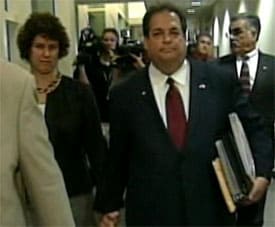 According to the Palm Beach Post: “Allen, a Merrit Island Republican, could have been sentenced to 60 days in jail. He plans to appeal. In addition to the probation, Allen was fined $250 and must pay $245 for in restitution to the Titusville Police for the initial investigation. Allen also must attend an HIV awareness class, undergo sexually transmitted disease testing and pay court costs.”

He’ll also have to find another location for his hobby: “He is…forbidden to return to Space View Park where the incident took place.”

Allen is lucky that Florida House Bill #1475, which he co-sponsored months before his arrest, failed. According to the Post, “[It would have] increased public sex charges from a misdemeanor to a felony. The proposed bill addressed ‘unnatural and lascivious acts or exposure or exhibition of sexual organs’ within 1,000 feet of a park, school or child care facility.”

Previous Post: « John Edwards Attacks Clinton Campaign Question Plants
Next Post: Pastor Ken Hutcherson Back for Another Round with Microsoft? »