The recent imprisonment of five men in Senegal in connection with a ‘gay wedding’ has caused such social uproar in the country that gays are reportedly fleeing to nearby The Gambia and Mali to avoid persecution, Afrol News reports: 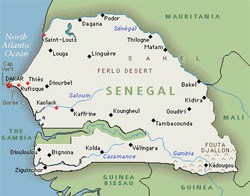 “The Gambia may not be a safe hideout for homosexuals, considering President Yahya Jammeh’s personal hatred of homosexuality. He had earlier threatened to crush any act of homosexuality in the country…Since the publication of a gay wedding in the outskirts of the capital Dakar in early February, stories on homosexuality have been dominating news in Senegal. The story – backed by photographs – was first published by a local magazine, Icone…The publication has flared tempers in the predominantly Muslim nation, resulting to arrest and detention of homosexuals and all those who graced the wedding, including musicians…Senegalese authorities have been under local religious pressures to avoid tolerating homosexuality in the country, especially as the country prepares to host a major international Islamic summit on 12 March. Led by an influential Muslim cleric and lawmaker, Imam Mbaye Niang, hundreds of people took to the streets of Dakar to protest against the government’s failure to prosecute the gay suspects. Chanting Allahu Akbar [God is great], the protesters later turned violent, burning rubbish and blockading roads close to the central mosque in Dakar.”