This nugget came at the end of a long article about Crist’s support of Florida’s “tax swap” amendment: 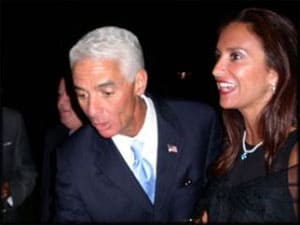 “Also on Monday, Crist said he supported Amendment Two which would constitutionally ban gay marriage in the state. Such unions are already illegal in Florida and Crist has previously shied away from the issue, saying he has a ‘live and let live’ attitude.”

Crist proposed to girlfriend Carole Rome, who runs a company that manufactures beards, at the beginning of July. At that time, Crist was asked about his motivations behind getting married as well as the ongoing rumors that he’s gay:

“The governor says he’s not surprised that some people think he’s getting married, to improve his chances of being picked by John McCain as the Repubican vice-presidential candidate. He said nothing could be further from the truth. Governor Crist also responded to rumors about his sexuality. A reporter asked Crist his reaction to some people’s preoccupation with his sexuality, and sexual orientation. Crist responded, ‘Well, you know, when you’re in the public eye, and being governor of Florida that’s inevitable, you know, I don’t really focus on it, I’m just damn glad I found such a wonderful lady.’ He was also asked if rumors about his sexual orientation or other rumors that he may be a heterosexual serial philanderer bother him. Governor Crist replied, ‘Well, lack of truth always would be disturbing to somebody.'”

Previous Post: « Michael Lohan Says He Won’t Give Away a Lesbian Bride
Next Post: Cameroon Journalist Jailed for ‘Homosexual’ Defamation »