As you probably know, the bailout bill failed this afternoon, and the GOP is trying to blame the failure on ‘hurt feelings’ from a speech given by House Speaker Nancy Pelosi before the vote. 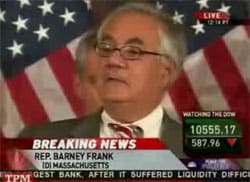 “Here’s the story. There’s a terrible crisis affecting the American economy. We have come together on a bill to alleviate the crisis. And because somebody hurt their feelings, they decide to punish the country. I mean, I would not have imputed that degree of pettiness and hypersensitivity. We also have — as the leader will tell you, who’s been working with them — don’t believe they had the votes, and I believe they’re covering up the embarrassment of not having the votes. But think about this. Somebody hurt my feelings, so I will punish the country. That’s hardly plausible. And there are 12 Republican members who were ready to stand up for the economic interest of America, but not if anybody insulted them. I’ll make an offer. Give me those 12 people’s names and I will go talk uncharacteristically nicely to them and tell them what wonderful people they are and maybe they’ll now think about the country.”

Watch it as well as Pelosi’s speech, AFTER THE JUMP…

Here’s part of what Pelosi said:

“Today, we will act to avert this crisis, but informed by our experience of the past eight years with the failed economic leadership that has left us left capable of meeting the challenges of the future. We choose a different path. In the new year, with a new Congress and a new president, we will break free with a failed past and take America in a New Direction to a better future.”

Here’s her whole speech. Think Progress notes that “Pelosi’s speech mentions the word ‘Republican’ once — in the context of praising them for bipartisanship: ‘Over the past several days, we have worked with our Republican colleagues to fashion an alternative to the original plan of the Bush Administration.'”

Here are the Republicans laying blame: