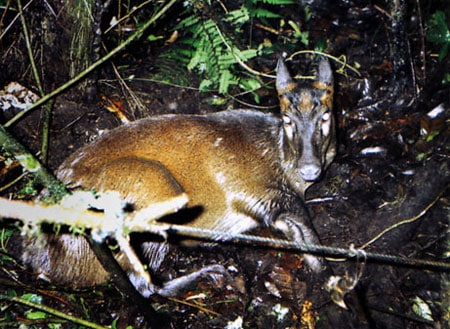 Like the African Okapi, the Sumatran muntjac had not been seen in the wild in decades. This recently-identified individual was found in a snare by an anti-poaching squad:

“The photo, released Friday, is the first record of the ‘lost muntjac of Sumatra’ in 80 years, says U.K. conservation group Flora & Fauna International. An anti-poaching patrol had photographed the mountain deer at 6,400 feet (1,950 meters) in 2002. It was only recently, however, that muntjac expert Robert Timmins recognized the rain forest deer in the photo as the first documented Sumatran muntjac since 1930.”

The Sumatran muntjac has now been placed on the global Red List of Threatened Species.