MArk Foley tells the AP he’s “trying to find his way back” in the wake of the underage page scandal that forced his resignation from Congress in September 2006: 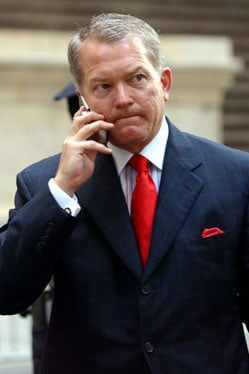 “Foley insists he did nothing illegal and never had sexual contact with teens, just inappropriate Internet conversations. Investigations by the FBI and Florida authorities ended without criminal charges. And while he concedes his behavior was ‘extraordinarily stupid,’ he remains somewhat unwilling to accept full public scorn. These were 17-year-olds, just months from being men, he insists. ‘There was never anywhere in those conversations where someone said, ‘Stop,’ or ‘I’m not enjoying this,’ or ‘This is inappropriate’ … but again, I’m the adult here, I’m the congressman,’ Foley said. ‘The fact is I allowed it to happen. That’s where my responsibility lies.'”

Just months from being men.

Foley denies there is any hypocrisy involved, even though he was co-chair of the Congressional Missing and Exploited Children’s Caucus which helped to create a law protecting children on the internet.

Says Foley: “The work I was doing was involving young children … You know, you hear the term ‘pedophile.’ That is prepubescent. At the end of the day, they were instant messages that were extraordinarily inappropriate.”

Adds Foley: “In public life, you dream of the day they’ll name a hospital after you, or a bridge or a post office,” Foley said, twisting a gold band on his ring finger identical to one his high-society dermatologist boyfriend wears. If I had a post office named after me today, they’d probably return to sender. It’s not a pleasant place to be. It’s not what I envisioned … working this hard all my life to end up in an ash heap because of a momentary lapse of judgment.”

Foley blames the “demons” inside him for doing what he did – those demons being sexual abuse by a priest, drinking, drugs, and cigarettes. He’s been through a treatment program and now says he’ll take it “a day at a time.”

AFTER THE JUMP, the Mark Foley scandal in seven minutes.