Earlier in the week I posted about Prince Harry’s home video, which recently surfaced and showed the third-in-line using racist terms for his fellow soldier, who is Pakistani. The video also contained references to gays, and while some thought it homophobic, the UK’s leading gay activist Peter Tatchell is defending Prince Harry. 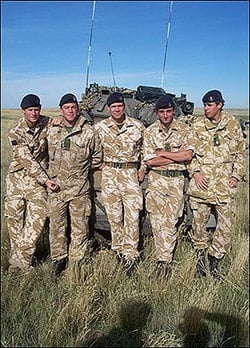 Tabloid News of the World reported on the video: “Later Harry, wielding the camera again, asks another member of the squad to talk through the exercise they have just done. He asks for ‘your ups and downs in the exercise. Highs and lows. Good people, bad people. Good points, bad points.’ Off camera, he adds: ‘How do you feel? Gay? Queer on the side?’ Then Harry asks another cadet: ‘Anything you want to say? There’s no secrets here. Quickly just tell me what the f ** k is going on?’ … Other scenes in the video diary show Harry enjoying party nights out with his pals on manouevres. In one scene the Prince—now on the wagon—mockingly mouths to another soldier “I love you” before kissing him on the cheek and licking his face.”

Said Tatchell: “For him to happily give his soldier friend a public kiss and lick his face strikes me as rather liberated and enlightened, for a straight man. If only more heterosexual men were relaxed about same-sex affection like Harry, the world would be a better place. The context and intention of words is crucial in deciding whether they are offensive or not. I don’t find anything objectionable about the context in which Harry used the word queer.”