RNC Chair Michael Steele caved to Rush Limbaugh after calling him "ugly and incendiary" on CNN Saturday night for remarks that he wanted Obama to fail. D.L. Hughley called Limbaugh the de facto leader of the Republican party to which Steele snapped back, "No, he's not." 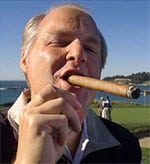 Limbaugh quickly fired back: "Why are you running the Republican Party? Why do you claim you lead theRepublican Party when you seem obsessed with seeing to it thatPresident Obama succeeds? I frankly am stunned that the chairman of theRepublican National Committee endorses such an agenda."

Late yesterday, Steele told Politico that he "reached out" to Limbaugh:

"My intent was not to go after Rush – I have enormous respect for Rush Limbaugh.I was maybe a little bit inarticulate. … There was no attempt on my part to diminish his voice or his leadership. It was one of those things where I thinking I was saying one thing, and it came out differently. What I was trying to say was a lot of people … want to make Rush the scapegoat, the bogeyman, and he’s not. I’m not going to engage these guys and sit back and provide them the popcorn for a fight between me and Rush Limbaugh. No such thing is going to happen." 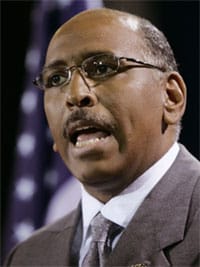 Steele continued: "I wasn’t trying to slam him or anything. He brings a very important message to the American people to wake up and pay attention to what the administration is doing. Number two, there are those out there who want to look at what he’s saying as incendiary and divisive and ugly. That’s what I was trying to say. It didn’t come out that way. … He does what he does best, which is provoke: He provokes thought, he provokes the left. And they’re clearly the ones who are most excited about him. I wasn’t trying to offend anybody. So, yeah, if he’s offended, I’d say: Look, I’m not in the business of hurting people’s feelings here. … My job is to try to bring us all together."

Senator John Barrasso of Wyoming, a member of the GOP whip team, appears to fear the wrath of Limbaugh as well. In an interview with David Schuster, Barrasso refused to criticize Limbaugh for saying he wants Obama to fail.

Katie Couric appeared on David Letterman last night. Letterman called him a "bonehead" and asked her, "What about this bonehead Rush Limbaugh? Honest to God, I mean, what is going on there?
He gets up in Washington and he's the keynote speaker at some functionand he comes up and he looks like an East European gangster. He's gotthe black jacket on, the black silk shirt and it's unbuttoned like, ohyeah, when you think Rush Limbaugh, you think, 'Ooh, let's see a littleflesh.' Honestly. What is he doing?"

Couric refused to step into the fray, saying, "So much for my interview with Rush."

And Louisiana Governor Bobby Jindal told Larry King that he's glad Steele apologized to Limbaugh: "I'm glad he apologized.I think the chairman is a breath of fresh air for the party. AsI said before I think Rush is a leader for many conservatives and saysthings that people are concerned about."

Watch all of those clips, AFTER THE JUMP….