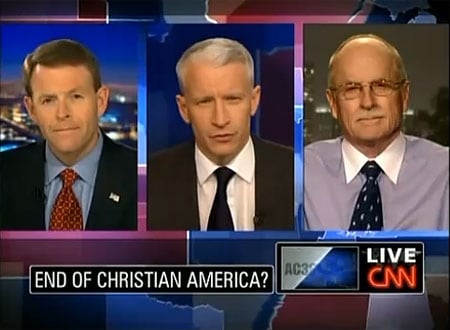 White certainly gets the right point across in the end:

COOPER: I've got to give Mel the last word, because I gave Tony the first word — Mel.

WHITE: It's really important for people to realize that Tony andDobson and these others have been misleading the public for so manyyears about sexual orientation and gender identity. It's soimportant to see through their half-truths and their hyperboles. It'sreally important to realize the damage they're doing by not saying thatGod created us gay. God loves us gay. And we should have all the rightsthat the American people provide all of us. So Tony sounds good likeRick, but they're really saying things that are horrible anddestructive.

COOPER: Tony, I'll give you a quick response, because it was directed at you.

PERKINS: Well, I would just say it's not true. The Bible speaks for itself.

WHITE: The Bible says nothing about homosexuality, Tony.

PERKINS: You know that very well that it does. But Mel, nonetheless, Mel, I love you. Appreciate you as a human being.

WHITE: Don't say that because as soon as you say about gay people lead to destruction, the break-up of families… You continue this, "We love you, but we hate you. We love you, but…We don't want you to have rights. Tony, I've read your material. I've monitored you for tenyears. You've got to get off this anti-gay stuff, because they'releaving the churches, because they've seen through your fundamentaliststuff."