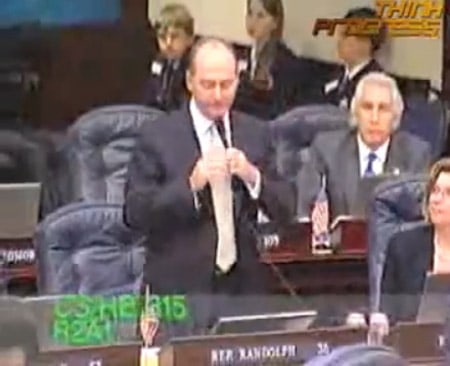 Florida's legislature brought up the subject of gay adoption for the first time in 33 years as two lawmakers, Charlie Justice in the Senate, and Scott Randolph in the House, introduced amendments that would have prohibited discrimination in that area.

Think Progress reports: "Rep. Scott Randolph’s measure, which amended a bill about gun ownership and adoptions, would have prevented “adoption agencies from inquiring about a person’s sexual orientation as a requisite for adoption.” Randolph was forced to withdraw his amendment after the Speaker ruled that it was not germane to the bill. Sen. Charlie Justice also withdrew his bill in the Senate.'This amendment points out that government should not ask irrelevant questions in the adoption process which tell us nothing about a person’s ability to provide a permanent and loving home. Rather, it’s lawful and responsible gun ownership or a person’s sexual orientation,' Randolph announced on the House floor."

The Palm Beach Post reports that Justice's amendment was withdrawn as well. Said Sen Nan Rich: “I know this amendment is not going to pass today and that Florida’s discriminatory adoption ban will not fall today. It’s been four year since there’s been any debate on this issue in any official Senate proceeding in any Senate committee and it’s been 33 years since this issue has been debated on the floor of this chamber. It’s about time we did something about that.”

Watch as Randolph's amendment is introduced, AFTER THE JUMP…