Lt. Dan Choi gives a revealing interview to Newsweek about what happened to him over the course of the two days during which he was cuffed at the White House, spent the night in jail (he was denied a phone call), and arraigned.

He also takes the Human Rights Campaign to task, throughout it: 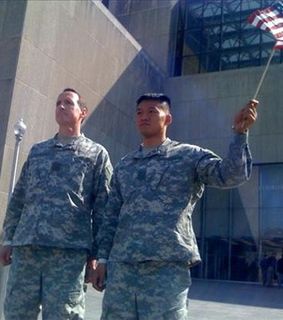 — "Within the gay community so many leaders want acceptance from polite society. I think there's been a betrayal of what is down inside of us in order to achieve what looks popular, what look enviable. The movement seems to be centered around how to become an elite. There is a deep schism [in the gay-rights movement], everyone knows this. But this shouldn't be about which group has better branding. There is a tremor right now in every gay and transgender youth that these groups are not grasping. I would say to them—you do not represent us if all you are looking for is a ladder in to elite society.

When I get messages from people who want to be a part of this I ask back: what are you willing to sacrifice? We are tired of being stereotyped as privileged, bourgeois elites. Is someone willing to give up their career, their relationships with powerful people, their Rolodex, or their parents' love to stand up for who they are? I'm giving up my military rank, my unit—which to me is a family—my veterans' benefits, my health care, so what are you willing to sacrifice?"

— "Ghandi (sic) did not need three-course dinners and a cocktail party to get his message out."

— "When I heard Kathy Griffin was going to be a spokeswoman for Don't Ask, Don't Tell, I wondered about that. I have great respect for her as an advocate. But if [the Human Rights Campaign] thinks that having a rally at Freedom Plaza with a comedienne is the right approach, I have to wonder. Don't Ask, Don't Tell is not a joking matter to me. To be at Freedom Plaza and not at the White House or Congress? Who are they trying to influence? I felt like they were just trying to speak to themselves. If that's the best the lobbying groups and HRC can do, then I don't know how these powerful groups are supposed to represent our community. Kathy Griffin and [HRC president] Jay (sic) Solmonese said they would march with me to the White House but didn’t. I feel so betrayed by them."

As a member of the military, Choi also says he's taking his direction from the Commander in Chief:

"We all know the political reality now. The only way for the repeal to go through is for the president to take leadership and put it in the Defense Authorization Bill. There's a sunset on this, and it's happening quickly. Obama told us at the HRC dinner last year, you need to put pressure on me. I was there at that dinner, in uniform. So this is my mission; the president said to pressure him and I heard that as a warning order."

This is My Mission [Newsweek]