Tween YouTube singing sensation Justin Bieber apparently isn't masculine enough for some Facebook users who have set up a group that has attracted over 300,000 fans. The goal of the group, which posted this photo of Bieber to the page, is to vote Bieber out of the male gender. 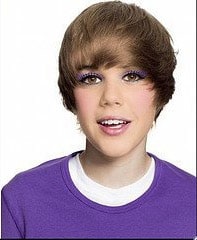 Why? Well, according to some of the posters to the group:

"justin bieber is a fagg!!! it not just guys that hate him, there are some chicks out there that hate him soo and im deff one of em, JUSTIN BIEBER IS A FUCKING UGLY FAGG!

"justin bieber is the biggest fag in knowen history"

"Justin Bieber is going to get caught sucking a dick someday, it will be all over the news/internet and all of us "justin bieber haters" will be able to say "I told you so."

"biebers a little fag. the first time i heard him i thought it was beyonce or something"

This is the kind of online bullying that plenty of "unknown" kids experience every day. It's sickening to see it played out on Facebook like this.