Steven Monjeza, who has been held in prison in Malawi since late December for holding an engagement party with Tiwonge Chimbalanga, is critically ill and has been "vomiting, coughing and suffering from pain and pressure in his chest for the last eleven days," according to reports. 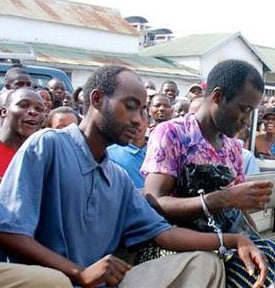 "He has been held on remand in an overcrowded, squalid call for over three months, without proper food, sanitation or medical care. He looks very ill and has lost weight. The prison authorities have failed to give Steven proper treatment, or even sufficient pain killers. His pain-killers ran out on 10 April. My informant says Mr Monjeza urgently needs to go to hospital for a full medical examination and treatment. His health is likely to deteriorate further unless he gets swift medical care. Toilet and shower facilities are deficient. Mr Monjeza receives only two meals a day. It is always the same maize porridge with beans, which has low nutritional value. Steven and Tiwonge are being held on remand, they have not been convicted of any offence. Yet they are being treated like criminals and imprisoned with hardened with felons convictedof serious crimes. Requests by Mr Monjeza and Mr Chimalanga for bail have been turned down, even though people convicted of violent assaults, even murder, have been previously granted bail. It looks like they are being singled out for special victimisation. We ask you [readers] to lobby the Malawian Ambassador in your country. Ask him or her to press the government of Malawi to transfer Mr Monjeza to hospital and provide him with medical treatment."

A judge has set May 18 as the date for a final ruling in the case.

Previous Post: « Tune In
Next Post: Group Working for 2010 Proposition 8 Repeal Fails to Collect Enough Signatures to Qualify for Ballot »