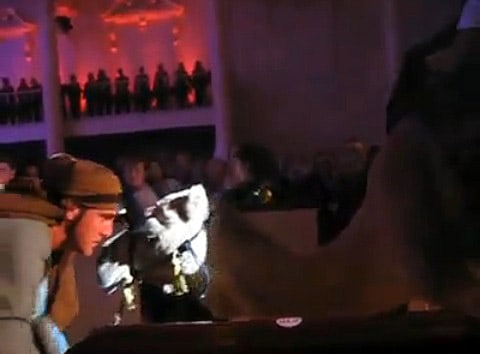 The First Baptist Church of West Palm Beach's Nativity Pageant last Thursday night apparently included a segment about animal cruelty. The choir went on singing as a camel fell into the pews.

The camel belongs to Citra, Fla.-based Animals in Motion. The company trains and transports animals for movies, shows and private parties. A trainer with the company was guiding Lula Bell when she fell. Lewis said veterinarians were also on hand.

But Animals in Motion owner Timothy Rivers has had some animal-related controversies. In 2002, Rivers pled guilty to illegally selling two federally protected black leopards in 1998 and was sentenced to six months in prison. Before that, he was a target of protests over a "high diving mules" act. Authorities charged Rivers with animal cruelty, but he was not convicted. Rivers insists that no prods were used, and the animals were not pushed up the ramp or off the high dive.

Thankfully, the camel is okay after the accident.