Now that the Pope has joined Twitter, Paul Rudnick imagines some of the pontiff's tweets: 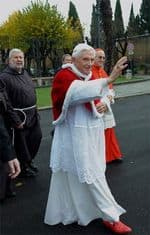 During a papal audience, I put folks at ease by asking, “Are you gay?” Then I say, “Kidding!” Then I go, “No, seriously, are you gay?”

It’s hard to tell all the cardinals apart, so sometimes I put different dinosaur stickers on their backs.

Proof of God’s existence: St. Patrick’s is right next to Saks.

Whenever people doubt that angels are real, I ask them, “Excuse me, but have you seen the Jonas Brothers in concert?”

I hate to say it, but nuns are God’s punch lines.

Michele Bachmann is not Satan. Satan doesn’t have split ends.

I met the Dalai Lama and he was so nice, but all I could think was, Sandals? In January? Really?

Read all them at The New Yorker…