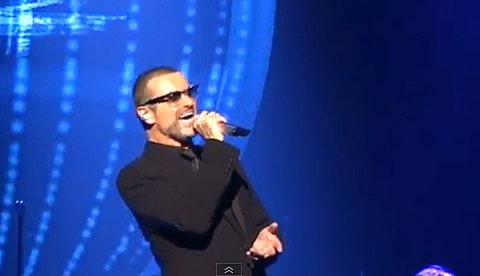 At the opening night of his Symphonica Tour in Prague, George Michael revealed that substance abuse issues had led to his split from longtime partner Kenny Goss, and that he had been keeping quiet about it for a number of years. Goss and Michael had been together since 1996.

I tracked down the clip of Michael's comments.

Listen to Michael tell the audience in Prague and perform the song, AFTER THE JUMP…

"I'm so sorry for any pain that I've caused him or that he's caused back. So sorry that things have worked out the way they have. But in truth, Kenny and I have not been together for about two and a half years. All I can say is that I love him very much but sometimes people really should know when their demons are more interested in each other than they are. This man has brought me a lot of joy and a lot of pain as is the case in so many relationships, but I just wanted to focus time to be honest about that…My love life is a little more turbulent that I have let on…"

Michael then introduced a new song that he wrote about Kenny called "Where I Hope You Are."

Listen to Michael tell the audience in Prague and perform the song, AFTER THE JUMP…