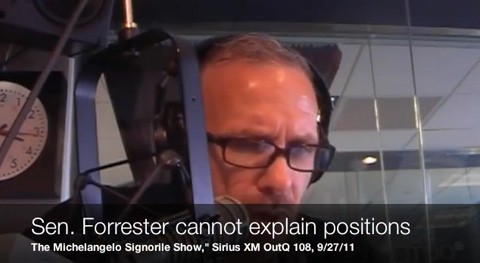 North Carolina Senator James Forrester is the  sponsor of that state's successful bill to put an amendment banning same-sex marriage on the ballot. You may recall a disgusting video I posted in early September of Forrester, who is a doctor, at a town hall, saying this:

"I’ve got a few homosexual patients and I treat them just the same as anybody else. I love them perhaps even more because I know they are going to die at least 20 years earlier and it’s something I have no control over and we need to reach out to them to try to get them to change their lifestyle and back to the normal lifestyle which we can accept."

Forrester agreed to appear on Michelangelo Signorile's radio show yesterday which was a big mistake for him.

This interview has to be heard to be believed: Forrester not only could not back up his claims with any evidence — after first trying to source the Centers for Disease Control, only to be debunked by me — but he actually acknowledged that he could be wrong. He eventually credited a Christian activist named Frank Turek (who is associated with Maggie Gallagher and the National Organization for Marriage) as his source of this bogus public health information. Forrester had said in his town hall some of his patients were gay men who died early deaths, yet didn't seem to know anything about public health, including that, on a global level, AIDS drastically affects heterosexuals more than gay men. Later, he couldn't answer why he wasn't proposing a divorce ban if his goal is to save marriage, and couldn't explain why gays harm marriage.

Listen to the interview which ends with this dangerous crank accusing Signorile of trying to set him up, AFTER THE JUMP…

You can listen to the full interview audio at Signorile's website.