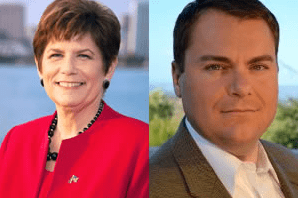 And they're both Republicans!

Councilman Carl DeMaio and District Attorney Bonnie Dumanis have partners. Voters don't seem to care either way about their orientation. And the third candidate for the Republican nomination, a former marine, was the sole state Republican assemblyman to vote for California's gay history bill.

It's a pro-gay phalanx! Though DeMaio, who recently spoke at a Rick Perry rally, is a bit controversial:

Nicole Ramirez Murray, a longtime gay activist in San Diego, criticized DeMaio in a recent column for the San Diego LGBT Weekly because DeMaio identified himself as single in a questionnaire for The San Diego Union-Tribune.

DeMaio says he listed himself single because that's what he is under California law. He noted that he often appears publicly with his partner in his conservative district.

DeMaio was silent during the Proposition 8 campaign, unlike Dumanis, who was outspoken against the marriage ban. He says he believes that gays should be entitled to marry but that he wouldn't take up the issue as mayor.

In any case, this is real progress. It was only four years ago, in 2007, that the city's mayor faced a Republican mutiny after he tearfully endorsed marriage equality at a press conference. Nationally, the trend is the same:

A nationwide Gallup poll in June showed 67 percent of voters surveyed would elect a gay president, up 12 percentage points from four years ago. The Gay and Lesbian Victory Fund says the number of openly gay officeholders nationwide doubled in the last four years to about 500.

The big question: how can the Republican Party continue to balance its "fam-vals" and civil libertarian wings? How can it lap up the bile at the Value Voters Summit (and applaud Bryan Fischer, who wants to bar gays from public office) while simultaneously running gay candidates? Can it sustain this schizophrenia?