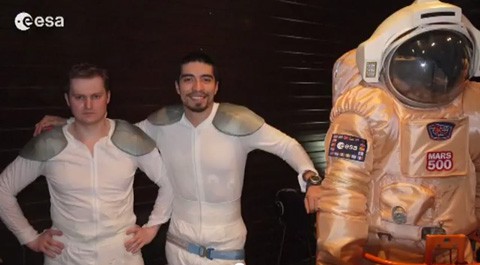 On June 3, 2010, six volunteer astronauts (an all-male crew of three Russians, one man from China and France and an Italian-Colombian) were isolated in a capsule to simulate a mission to Mars. They "returned" at 6 am this morning when they were allowed to leave their capsule. They are in four days of debriefing currently before speaking with the press on November 8.

The "mission" cost $15 million and the crew was required to perform a number of experiments, and live in conditions that would simulate a journey to the red planet.

August was the low point, he said. E-mail messages from the crew’s friends and family were delayed depending on how far they were from Earth, and in that month, those messages moved at their slowest rate. Spirits picked up substantially starting Sept. 15, as the capsule came, virtually, closer to Earth and messages started to flow in real time.

Watch a fascinating compilation, AFTER THE JUMP…