Knoxville, Tennessee restaurant Bistro at the Bijou is receiving boatloads of support on Facebook after reports began surfacing that it refused service to state Senator Stacey Campfield out and asked him to leave.

Campfield is also getting blowback from local news outlets in Tennessee over his remarks. Watch him defend them in a WBIR interview, AFTER THE JUMP… 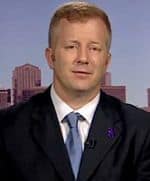 Campfield, who has been in the news again recently because he's still trying to push his heinous homophobic "don't say gay" bill in Tennessee, gave an interview last week to Michelangelo Signorile in which he asserted that bullying of gay kids "is a lark", compared homosexuality to sex with animals, asserted that homosexuality is "glorified" in the media, and that it's "virtually impossible" for heterosexuals to contract AIDS.

Some of the responses on Facebook to the alleged restaurant incident:

Brooke Scurlock
From Nashville- thank you for your stand against bigotry and discrimination! Will be sure to eat at your place when in Knoxville and spread the word to friends and family! Thank you!

Jeff Doughty
Just heard a rumor that yall asked th village idiot to leave!! If its true, THANK YOU!!

Kelly Schaal
If you did indeed kick Mr. Campfield out of your establishment…I applaud you!! That clown is an embarrassment to our state and an embarrassment to the residents that actually aren't small minded bigots, living in a 1950's mentality. I cannot wait for this joke of a "representative" to be replaced. He has done absolutely NOTHING for the people of Tennessee. These old school bigots will soon become the minority. I guess those of you that actually agree with his politics, should enjoy it while it lasts! He WILL be replaced very soon. I've always enjoyed The Bistro and now I'll enjoy it even more.

I haven't been able to find a full, proper account of what went down at the Bistro, and Facebook responders are also asking for one, so, hopefully we'll hear something official soon.

An unfazed Campfield told BuzzFeed in a brief telephone interview that "I went in there and the lady started calling me names and wouldn't serve me." The hostess told him he was a homophobe and that he hates homosexuals, he said.

Campfield said that on the contrary, he has no problem with gays. "In my business I do rental properties and I've rented to homosexuals, mixed-race couples, black couples," he said. "And about every single group you can think of has been in my office."

There's also a petition online to fire Campfield and a Facebook page to recall him.

Watch Campfield's interview with WBIR defending his anti-gay remarks, AFTER THE JUMP…

You may have missed…
Homophobic Sen. Campfield Confused About AIDS, Education, And Everything [tr]