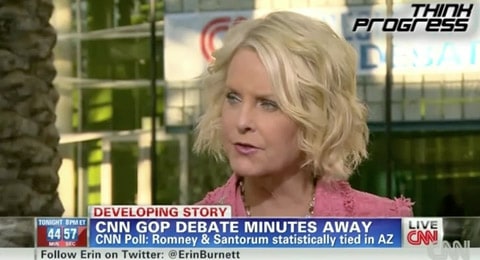 Before the Republican debate on Wednesday, Cindy McCain sat down with CNN and blamed the media for painting a picture of the GOP that makes them look anti-gay, Think Progress LGBT reports.

"I think the media portrays that. I think being a Republican, being part of the party for — as many years as I have and knowing the Republicans the way I do that is not the case and that’s not the bulk of Republicans that believe in that, at all. The vocal ones, maybe the ones that are on the far right side of the issue, but I — certainly in the state of Arizona – we are open-minded Republicans and believe in equality for all."