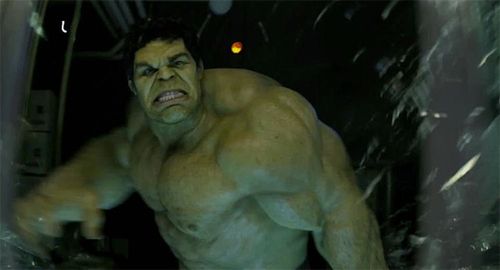 Here's the first motion-capture shot of Mark Ruffalo as The Hulk in Joss Whedon's upcoming The Avengers.

In a discussion last April about his prodigious chest hair, Mark Ruffalo said of his role as the Hulk:

"No one’s asked me to shave my chest yet, thank God. They want this Hulk to be as close to me as possible. I’ll be playing him in motion-capture, so this Hulk will just be a bigger avatar version of me. As they’re modeling him, they’re using many of my own features, down to my scars and wrinkles. He will have body hair, but I don’t know to what extent."

Can't see much there, so it looks like Hulk got waxed!