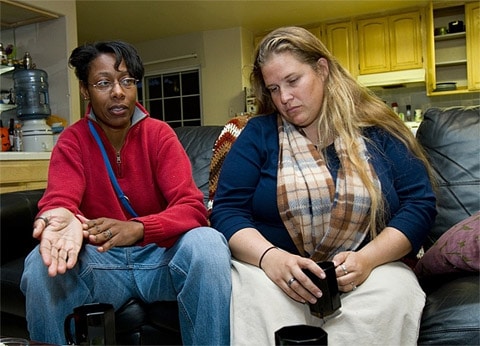 Tracey Cooper-Harris and the Southern Poverty Law Center filed suit yesterday against the Department of Veterans Affairs. Cooper-Harris is a decorated Iraq War Veteran who suffers from post traumatic stress disorder and was diagnosed with Multiple Sclerosis in 2010, and the regional VA medical center has determined that her illnesses are "service-related" 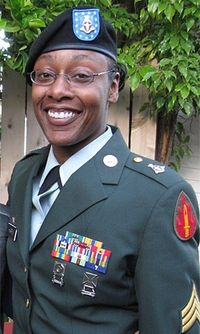 Still, despite the fact that Cooper-Harris married her spouse Maggie in 2008 when it was legal in California, the U.S. government is still dispensing her health benefits at a rate paid to single veterans. Cooper-Harris believes there is a high probability she may die from her illnesses and is concerned that Maggie will not receive the compensation given to heterosexual married surviving spouses.

Said Cooper-Harris to The L.A. Times: "There is a good likelihood that multiple sclerosis will cause my death, and I just want to make sure that whatever benefits are available, that Maggie gets them if I do die."

The paper notes that Cooper-Harris received "more than 20 medals during a dozen years of Army service, was honorably discharged in 2003…and provided care for military animals in the war theater, such as explosives-sniffing dogs."

Now the SPLC is challenging DOMA on her behalf:

The Southern Poverty Law Center filed a lawsuit on behalf of Cooper-Harris and her partner, charging that the Department of Veterans Affairs discriminated against them by denying these benefits but granting them to spouses in heterosexual marriages. It also charges the Defense of Marriage Act (DOMA) is unconstitutional because it bans federal agencies from recognizing such same-sex marriages, denying these couples benefits available to couples in heterosexual marriages

Watch Joe Levin and Christine Sun of the SPLC talk about the lawsuit, AFTER THE JUMP…