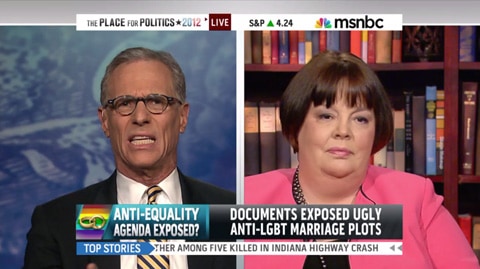 MSNBC's Thomas Roberts asks NOM's Maggie Gallagher about the document dump earlier this week that showed that NOM worked to stir tension between Blacks and gays:

"Do you defend your own race-baiting to further bigotry and homophobia on a national level?"

Previous Post: « Gay Man Speaks Out About Homophobic Cane Attack by 71-Year-Old Woman: VIDEO
Next Post: Help Get the Story of Anti-Gay Efforts in Maine on Movie Screens Nationwide: VIDEO »