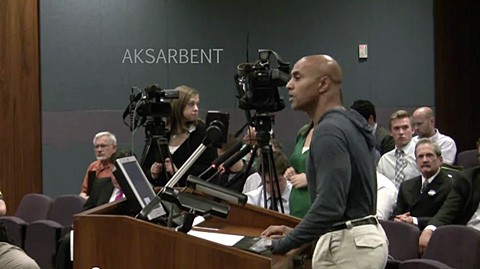 Nebraska Assistant Football Coach Ron Brown, who has faced calls for his firing since testifying against an LGBT anti-discrimination ordinance that passed in Omaha in March, gives an interview to the AP in which he portrays himself as a victimized Christian.

Brown acknowledges that he uses his position as a platform for his ministry. He sprinkles in football metaphors during his many speaking engagements and sometimes references the players he’s coached. He said the risk of losing his job pales in comparison to the price others have paid for standing up for their beliefs. Christians throughout the world, he pointed out, have been murdered because of their faith.

In his March testimony, Brown told the Omaha City Council what they were doing was "not Biblical".

Since the "not Biblical" ordinance passed, residents can now file complaints with Omaha's Human Rights and Relations Department if they are fired over their orientation, suffer other workplace discrimination or are refused service at restaurants, hotels or other places that serve the public.

Watch video of Brown's testimony before the Omaha City Council, AFTER THE JUMP…

Said Brown: "The question I have for you, like Pontius Pilate, is: 'What are you going to do with Jesus?' For those of you on this council who have a relationship with Christ, and only you know if you do, you will be held to great accountability for the decision you make."

Blogger Aksarbent, who shot video of Brown's "sermonette" to council members, wrote: "Brown has made a career of foisting his reactionary brand of Christianity on football players and of ignoring separation of church and state in his attempts to proselytize in public schools under the guise of campaigning against alcohol abuse, drunk driving and other problems which are quite solvable without religion."

Says Brown to the AP:

“To be fired for my faith would be a greater honor than to be fired because we didn’t win enough games. I haven’t lost any sleep over it. I realize at some point, we live in a politically correct enough culture where that very well could happen.”

Lincoln, Nebraska is considering a similar LGBT non-discrimination ordinance to that passed in Omaha. A hearing may be held on May 7.

"Brown said he is 'praying about' speaking in opposition if his schedule allows."

Watch video of Brown's testimony before the Omaha City Council, AFTER THE JUMP…