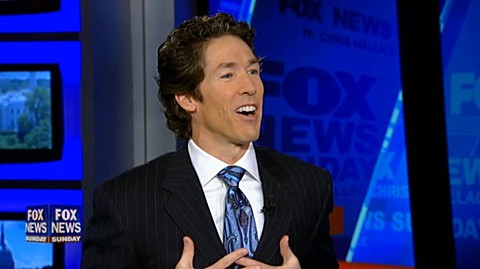 Megapastor Joel Osteen told FOX News' Chris Wallace on Sunday that he believes being gay is a sin but that he isn't a gay basher:

"I believe the Scripture says that being gay is a sin. But, you know, every time I say that, Chris, I get people say, well, you are a gay hater and you're a gay basher. I'm not. I don't — I don't dislike anybody. Gays are some of the nicest, kindest, most loving people in the world. But my faith is based on what I believe the Scripture says and that's the way I read the Scripture. I think we should discriminate against anybody. So, I think — yes, I don't think there is an issue where somebody couldn't go visit a gay loved one in the hospital. I don't think that's right. They love each other. "So, I think there should be some. I'm not for gay marriage, but I'm not for discriminating against people.

Previous Post: « RuPaul: No ‘Lying Bitches’ Will Ruin My Reveal
Next Post: Dan Savage on Calling the Christian Teen Walkout ‘Pansy-assed’ and on Calling Religion ‘Bullsh*t’ »