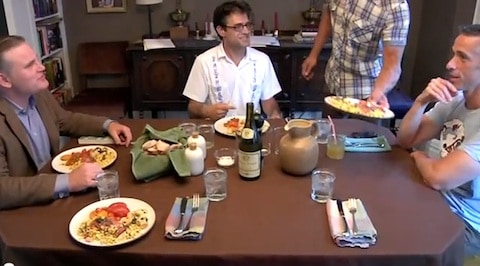 The video begins with two 10-minute opening statements. Savage discusses the speech he gave which prompted a walkout by some Christian students, points in the Bible and the discredited Mark Regnerus study, as well as NOM's promotion of points made by Regnerus, and how damaging they are.

Brown: "I don't accept that someone having a differing opinion, a different analysis of science, what you just laid out about Mark Regnerus, that somehow because his science doesn't agree with the argument that you've put forward, that the APA has put forward, that somehow there's a right to demonize or attack him. I think it's wrong and I think if we want to have a debate let's do it civilly…let's do it based on facts not innuendo."

Savage then discusses the Family Research Council's 'hate group' label and why it is such.

Savage: "If we hear about the abomination that is a man lying with a man, we never hear about the hundred plus other things that are labeled abominations in the old testament and why not? Why this selective cherry picking just to attack gay people to justify anti-gay bigotry. And i'm sorry there's no other word for it. I don't think principled opposition to same-sex marriage is necesarily bigotry. THAT is bigotry. What the FRC has put out there is unquestionable bigotry, which is why they were labeled a hate group, not by 'gayland', not by me, but by the Southern Poverty Law Center."

The conversation then moves on to the definition of marriage. Savage asks why his family can't be recognized with a civil marriage, and then Brown starts getting hot under the collar (screencap below) and starts getting very angry about being labeled a bigot.

BROWN: Gay marriage cannot exist. There cannot be a marriage of two men or two women. Just because the state says it's so – this is not based upon reality. You can call a cat a dog in the law but a cat does not become a dog. Marriage is by its definition – it is intrinsically something. It is not simply about your desires. It is not about my desires.

SAVAGE: Marriage is a package of civil rights and legal responsibilities, no longer an engendered institution.

BROWN: What about three people or four? 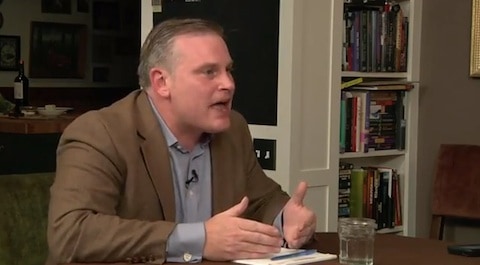